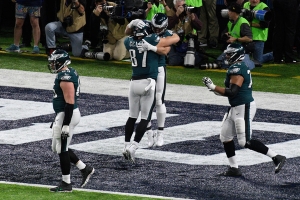 February 5, 2018 (Minneapolis) - While most people groan at the fact that the Patriots made it to the big show again, a lot of us sports fans will remember the Super Bowl matchup in 2004 when the Patriots emerged victorious over the Eagles.  Now, 14 years later, the Eagles were ready for revenge.

Both teams rallied on field goals in the first quarter, but it was Alshon Jeffrey’s miraculous catch in the end zone that gave the Eagles the lead, 9-3 after one.

Philly did it again on a 30-yard run in the second by Boise State alum Jay Ajayi after a strong offensive drive where the Patriots looked more like the Browns.  Stephen Gostkowski inched the Pats a bit further with three.  And James White did the rest with a 26-yard run to bring the Patriots within three after yet another missed field goal by Gostkowski.  But the eagles in their desperation for separation, went for it on fourth down at the goal line with 34 seconds left in the half with a smooth pass to the end zone to head to the locker room up 22-12.

The Eagles added three to start the fourth.  But they forgot who they were playing against. Gronk caught the end zone pass and the Patriots took a one point lead.  But Zach Ertz wasn’t letting that go.  The short pass was complete for the touchdown and Philly took the big five-point lead again.  A field goal sealed the deal for the Eagles and they got their revenge in Super Bowl 52, 41-33.

That was one of the best football games I've seen in quite awhile. The commercials were great too.

FYI all, Liz, our sports writer/editor, is from New England and an avid Patriots fan.

But this was painful for me to write, so you all better read it.