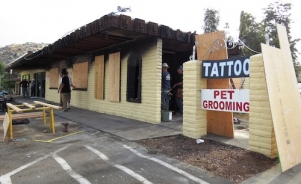 July 29, 2013 (El Cajon) – At 12:43 a.m. on July 25, Heartland Fire & Rescue crews in the City of El Cajon responded to reports of a structure fire in the 1-thousand block of Broadway in El Cajon.  Upon arrival firefighters found smoke and flames coming from the Classic Tattoo business located at 1024 Broadway.  Quick action by fire crews had the fire knocked down in less than 25 minutes.  Two adjoining businesses of the one story structure sustained smoke and water damage.  Heartland crews were assisted by fire units from Cal Fire and Santee fire departments.

There were no injuries reported.  Damage has been estimated at $250,000. The cause of the fire is now under investigation.