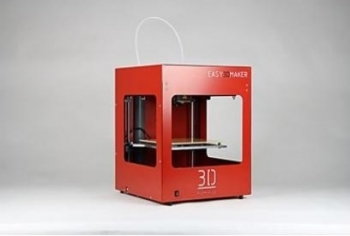 March 7, 2016 (San Diego's East County) -- What are the health and environmental risks of using a 3D printer to make stuff? —Will Nady, Pittsburgh, PA

As with most inventions, the thrill of the new has led to mass excitement surrounding 3D printing. The booming industry is expected to grow from nothing just a few years ago to some $4 billion by 2025. But some worry that our enthusiasm for 3D printing may be overshadowing some troubling health and environmental issues associated with the new technology.

3D printers heat plastic (usually a solid thermoplastic filament such as ABS or PLA) into a liquid and force it through a heated extrusion nozzle which in turn deposits it in thin layers onto a moving bed to form figures in predetermined shapes. But this process can send potentially harmful ultrafine particles (UFPs) and toxic fumes composed of volatile organic compounds (VOCs) into the air surrounding the machinery where users can breathe them in. In industrial settings, proper ventilation systems would be required and workers would have to wear protective gear to minimize exposure to similar UFP and VOC levels — but nowadays anyone can buy or borrow a desktop 3D printer and use it at home or in school without taking any extra precautions. One study, as reported on Phys.org, equated the effects of printing a small 3D item to smoking a cigarette indoors. Effects can include nausea and headaches, particularly for those with pre-existing heart or respiratory problems.

A fully enclosed 3D printing system could mitigate exposure issues, but the major 3D printer manufacturers have yet to license the valuable patent held by one company to make this technology widely available. Until then, it’s up to users to make sure to operate desktop 3D printers in a well-ventilated area. Also, PLA, which is made from organic material such as corn starch or sugar cane, seems to be a safer choice than petroleum-based ABS as far as fumes are concerned.

Besides the health effects, 3D printing can also be problematic for the environment. For starters, the plastic in 3D print material deteriorates significantly with each use, rendering recycling out of the question at this point. Another environmental hazard of 3D printing is the clear spike in electrical energy needed for the heating process. Using heat or lasers to melt plastic costs drastically more than traditional methods. When compared to injection molding, a 3D printer consumes almost 100 times the amount of energy on average to make an equivalent item.

On the plus side, 3D printing is an “additive” technology, meaning it only uses the exact amount of plastic source material needed, so little if any is wasted. Also, 3D printed objects tend to be much lighter than their traditional counterparts; this saves money, fuel, and carbon emissions when it comes to shipping. But critics maintain that the weight savings isn’t enough to counteract the energy intensity of the 3D printing process.

Whether we like it or not, 3D printing is here to stay, but only time will tell if the growing industry behind the phenomenon will be able to clean up its act as it enters mainstream.