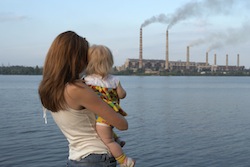 April 14, 2013 (San Diego) -- Dear EarthTalk: I know that some of us are genetically predisposed to get cancer, but what are some ways we can avoid known environmental triggers for it?

Cancer remains the scourge of the American health care system, given that four out of every 10 of us will be diagnosed with one form or another during out lifetime. Some of us are genetically predisposed toward certain types of cancers, but there is much we can do to avoid exposure to carcinogens in our environment.

According to the Environmental Working Group (EWG), a non-profit working to protect public health and the environment, a key first step in warding off cancer is lifestyle change—“stopping smoking, reducing drinking, losing weight, exercising and eating right.” The American Cancer Society reports that smoking and poor nutrition each account for about one-third of the 575,000 U.S. cancer deaths each year.

But smoking and obesity are obvious and other cancer triggers aren’t so easily pinpointed. In 2010 the President’s Cancer Panel reported that environmental toxins play a significant and under-recognized role in many cancers, causing “grievous harm” to untold numbers of Americans. And EWG reports that U.S. children are born “pre-polluted” with up to 200 carcinogenic substances already in their bloodstreams.

Given this shocking fact, it may seem futile to try to reduce our bodies’ chemical burden, but it could be a matter of life and death. EWG lists several ways anyone can cut their cancer risk. First up is to filter our tap water, which can include arsenic, chromium and harmful chemicals. Simple carbon filters or pitchers can reduce contaminants, while more costly reverse osmosis filters can filter out arsenic or chromium.

The foods we choose also play a role in whether or not we get cancer. Eating lots of fruits and vegetables is healthy, but not if they are laden with pesticides. Going organic when possible is the best way to reduce pesticide exposure. And when organic foods aren’t available, stick with produce least likely to contain pesticides (check out EWG’s “Clean 15” list of conventional crops containing little if any pesticide residue). EWG also suggests cutting down on high-fat meats and dairy products: “Long-lasting cancer-causing pollutants like dioxins and PCBs accumulate in the food chain and concentrate in animal fat.”

Another cancer prevention tip is to seal wooden outdoor decks and playsets—those made before 2005 likely contain lumber “pressure-treated” with carcinogenic arsenic in order to stave off insect infestations. Of course, avoiding too much sun exposure—and wearing high-SPF sunscreen—when using those decks and playsets is another important way to hedge one’s bets against cancer.