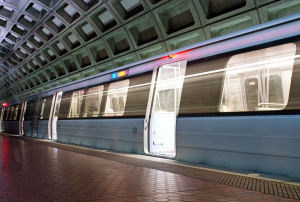 The benefits of making a major commitment to building up and efficiently managing a larger and more comprehensive public transit network are many.

According to the National Alliance of Public Transportation Advocates (NAPTA), an organization that represents grassroots transit coalitions, organizations and advocates, expanded public transit, coordinated with greener development and other “operational efficiencies,” can reduce our carbon footprint by some 24 percent, which is significant given that carbon dioxide (CO2) output from the transportation sector as a whole account for 28 percent of total U.S. greenhouse gas emissions. After all, buses and trains burn much less fuel per rider than a car with a single rider in it. Switching to public transit for a typical 20-mile round trip commute would decrease a commuter’s annual greenhouse gas emissions by some 4,800 pounds a year, which is equal to about a 10 percent reduction in a two-car household’s carbon footprint.

Another group, the American Public Transit Association (APTA), reports that current use of public transit in the U.S. already saves 37 million metric tons of CO2 annually, equivalent to the emissions resulting from electricity generation to power some five million typical American homes.

A massive shift to public transit would also be good for our pocketbooks. According to NAPTA, U.S. car owners can save as much as $112 billion a year in gasoline and other vehicle costs. “Public transportation offers an immediate alternative for individuals seeking to reduce their energy use and carbon footprints,” reports NAPTA. “Taking public transportation far exceeds the combined benefits of using energy-efficient light bulbs, adjusting thermostats, weatherizing one's home, and replacing a refrigerator.”

An improved quality of life is yet another benefit of more public transit. In some ways public transit can be considered a life saver: It produces 95 percent less carbon monoxide and nearly 50 percent less nitrogen oxide—both key triggers for asthma and other respiratory and cardiovascular health problems—per passenger-mile than driving a private vehicle. Also, transit users tend to be healthier than car commuters because they walk more, which increases their fitness levels. Public transit use also means fewer cars on the road, thus reduced travel times—and less stress and road rage accordingly—for everyone. TTI reports that Americans living in areas served by public transportation save themselves almost 800 million hours in travel time every year.