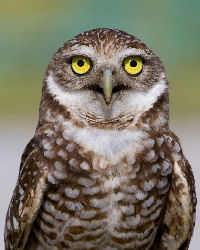 November 9, 2012 (California) --  Western burrowing owls (Athene cunicularia) are tiny, long-legged members of the owl family, native to the Americas and preferring open landscapes where they can dig new holes or use existing ones (such as abandoned prairie dog, skunk or armadillo homes) to nest and rear their young. Unlike most other owl species, these small but charismatic birds are more often seen out and about during daylight hours, but they are most active and do their primary feeding at night, preferring a diet of small rodents and large insects.

Once a common species in California and across North America, the Western burrowing owl has become a rarer and rarer sight over the last three decades given habitat loss and other environmental perils the bird faces. Biologists consider the bird an indicator of wider ecosystem health, so if its population numbers are healthy then local ecosystems are likely thriving. But these days the bird is endangered in Canada and threatened in Mexico, is a state endangered species in Colorado, and is considered a “species of special concern” in Florida and most of the western U.S. It is also listed on the International Union for Conservation of Nature’s (IUCN’s) international “Red List” of endangered and threatened species (albeit as a species of “Least Concern” in comparison with others in more dire straits).

A group of dedicated birders, conservationists, biologists and concerned citizens in San Francisco’s East Bay came together to protect dwindling burrowing owl populations locally but ended up creating a movement that spans the entire North American continent. Their group, the Burrowing Owl Conservation Network (BOCN) believes that burrowing owls are vital to maintaining healthy, functioning ecosystems, and as such is working on several fronts to help protect habitat and reverse the animal’s population slide.

First and foremost, BOCN works to conserve habitat for burrowing owls in California and beyond, including constructing artificial burrows to help re-establish burrowing owl colonies while larger ecosystem restoration efforts are underway. Teaching children and communities about ways they can help protect and improve burrowing owl habitat is another important part of BOCN’s work. Other ways the group helps the owls is by advocating for legislation and policy changes that encourage conservation of habitat, networking with like-minded individuals and institutions, and conducting field and laboratory research to increase understanding about how to help burrowing owls and create habitat conditions ideal for their survival.

The fact that burrowing owl populations in other parts of the world are rebounding gives hope to BOCN and other wildlife advocates and environmentalists. The birds are common and widespread in Central and South America, where they inhabit fields and even sometimes parks in urban areas.

Whether the birds can replicate their success in Latin America up north remains to be seen. As for what readers can do to help, learning about the behavior, biology and habitat needs of wild animals like the burrowing owl is a sure way to develop respect for nature’s inhabitants and a lifelong willingness to protect them. And nothing beats witnessing burrowing owls go about their rounds. Seeing them in the wild is enough to convince anyone that they are worth fighting to protect.