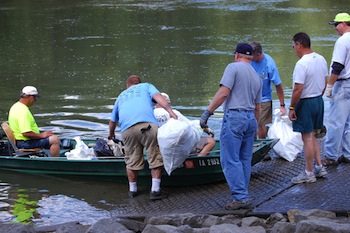 December 18, 2013 (San Diego) – Dear EarthTalk: Is there a way to get local communities involved in cleaning up waterways, like rivers, lakes, streams and creeks?

Indeed, many of our local waterways have seen better days, thanks to decades of pollution. And cleaning them up and preventing further damage can be challenging, since much of the contamination has accumulated over time and results from what is known as “non-point source” pollution, which accounts for as much as 60 percent of the water pollution in the U.S.

“When it rains, fertilizer from lawns, oil from driveways, paint and solvent residues from walls and decks and even pet waste are all washed into storm sewers or nearby lakes, rivers and streams—the  same lakes, rivers and streams we rely on for drinking water supply, boating, swimming and fishing,” reports the non-profit Natural Resources Defense Council (NRDC). “Also, improper handling of materials around the house can lead to pollution.”

According to NRDC, each of us can do our part to reduce this run-off pollution and thus help protect local waterways. For one, we can replace concrete and other hard surfaces around our homes with porous materials, so that rainwater drains naturally into the ground and not into pathways that lead it into waterways. We can landscape with native plants and natural fertilizers, and refrain from over-watering our lawns and gardens. And we can properly dispose of hazardous products (that is, not right down the drain), wash our cars at professional carwashes (where there are proper wastewater treatment procedures), recycle used motor oil, and use non-toxic alternatives for household chemicals whenever possible.

Of course, there is only so much that individuals can do on their own. While preventing pollution at the source is important, many waterways have so much legacy pollution in them already that they need to be cleaned up directly—no small job and typically way beyond the scope of a few individuals.  Some municipal, county or state governments might be inclined to help, but getting friends and neighbors involved first is a good way to demonstrate community support. Also, local businesses, non-profit groups, youth centers and schools are often looking for ways to get people involved in community service projects, so asking around town might be the best way to enlist dozens or more volunteers.

Another way to get the ball rolling is to sign up with American Rivers’ National River Cleanup program. Individuals, organizations and anyone interested in conducting a cleanup on their local river can register with the program and get free trash bags as well as assistance with media coverage, volunteer promotion and technical support. The program has helped more than a million volunteers participate in thousands of cleanups covering more than 244,500 miles of waterways across the U.S. since it began in 1991.

“These cleanups have removed more than 16.5 million pounds of litter and debris from America’s rivers and streams,” reports American Rivers. 2012 was the most successful year to date in the history of the program, with 400+ registered cleanups, 92,500 volunteers nationwide, 3.5 million pounds of trash removed from American waterways, and 39,000 miles of waterway cleaned. The group is hoping 2013 will turn out to be another record year for the program.