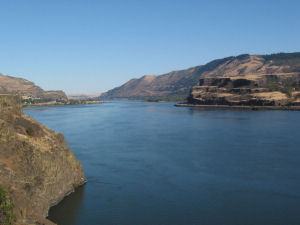 Global warming is no doubt going to cause many kinds of problems (and, indeed, already is), and rivers may well be some of the hardest hit geographical features, given the likelihood of increased droughts, floods and the associated spread of waterborne diseases.

For one, rivers are already starting to lose the amount of water they channel. A 2009 study at the National Center for Atmospheric Research (NCAR) found that water volume in the Columbia River in the Pacific Northwest declined by 14 percent since the 1950s. This trend is similar in major rivers all over the world.

“Many communities will see their water supplies shrink as temperatures rise and precipitation patterns shift,” reports the nonprofit American Rivers, adding that a rise in severe storms will degrade water quality and increase the risk of catastrophic floods. “Changes in the timing and location of precipitation combined with rising levels of water pollution will strain ecosystems and threaten the survival of many fish and wildlife species.” These shifts will have dramatic impacts, threatening public health, weakening economies and decreasing the quality of life in many places. In the U.S., the number of storms with extreme precipitation has increased 24 percent since the late 1940s—and the trend is expected to continue.

Another certain impact on rivers is more pollution as more frequent and powerful storms increase runoff from urban and agricultural areas that contain fertilizers, pesticides, chemicals and motor oil. “In older communities where storm water and sewage are transported together in one pipe, heavy storms can overwhelm the system and send raw sewage and polluted storm water into nearby streams and rivers,” says American Rivers. “These combined sewer overflows will grow more frequent as extreme storms increase.”

American Rivers reports that the health of our rivers in the face of increasing warming will depend largely on community preparedness. Municipalities that fail to address aging infrastructure “will experience greater increases in storm water runoff and sewer overflows.” And communities that have damaged their wetlands, forests, streams and rivers will have fewer natural defenses to protect against the effects of climate change.

There is much we can do to protect rivers besides reduce our carbon footprints. American Rivers is promoting green infrastructure—an approach to water management that protects, restores or mimics the natural water cycle—as the way to bolster the health of rivers. “It means planting trees and restoring wetlands rather than building a new water treatment plant. It means choosing water efficiency instead of building a new water supply dam. It means restoring floodplains instead of building taller levees.”