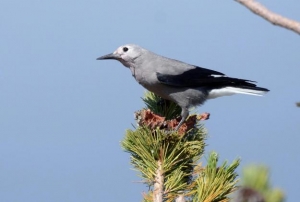 Dear EarthTalk: How is it that climate change is responsible for killing whitebark pine trees and thus impacting mountain ecosystems?   -- Dale Livingstone, Salem, OR

January 24, 2014 (San Diego’s East County)--Whitebark pine trees are a “keystone” species in high-altitude ecosystems across the American West, meaning they play an important role in maintaining the natural structure of many of our most iconic mountain regions. Wildlife from grizzly bears to songbirds are dependent on whitebark pine seeds for nourishment, while forest stands of the trees stabilize and shade the snowpack in winter, which helps reducing avalanches and helps extend snowmelt flows into the dry summer months.

Given how important the iconic tree is to Western mountain ecosystems, it’s no wonder that NRDC and other green groups are distressed by its recent decline due to changing environmental conditions. “White pine blister rust, a lethal disease accidentally brought to the continent on imported seedlings, has wiped out roughly 50 percent of the whitebark pine in the Rocky Mountains since its arrival in the early 20th century,” reports NRDC. “In some areas such as Glacier National Park, it has killed 85 to 95 percent of the whitebark pine. Infected trees can take a long time to die, but the disease can also cause their cone production to drop significantly, affecting grizzlies and other wildlife.”

And now a newer threat, expanding populations of mountain pine beetles, is exacerbating the effects of blister rust. These small insects bore into mature pine trees, killing them by eating critical tissue under the bark. “Cool year-round temperatures and freezing winters once kept this beetle confined to low-elevation forests, where native lodgepole pines evolved natural defenses against beetles,” reports NRDC. “Global warming, however, has allowed the mountain pine beetle to expand its range into high-elevation forests, where the whitebark pine is virtually defenseless against this newcomer and its explosive attacks.”

NRDC fears that this one-two punch—beetles attacking mature whitebark pines and blister rust killing smaller ones—could have a devastating impact on high-altitude forests across the American West. In late 2008 the group petitioned the U.S. Fish & Wildlife Service to protect the tree under the Endangered Species Act. A year and a half later the agency indicated that the tree might be worthy of endangered species status, although the case is still under review.

Everyday people who live in or near whitebark pine territory can help the cause by taking photographs and writing down observations about the changing health of high-altitude forests and the prevalence of Clark’s nutcrackers, red squirrels and grizzly bears, each of which depends on the trees for sustenance. The Whitebark Pine Citizen Scientists Network, a project sponsored by NRDC and TreeFight.org, coordinates this research and synthesizes the findings to give researchers and policymakers more information so they can make sensible land management and species protection decisions.