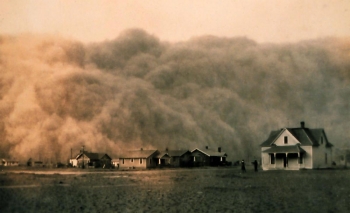 By Roddy Scheer and Doug Moss, E - The Environmental Magazine

Indeed we are embroiled in what many consider the worst drought in the U.S. since the “Dust Bowl” days of the 1930s that rendered some 50 million acres of farmland barely usable. Back then, drought conditions combined with poor soil management practices to force some 2.5 million Americans away from the Great Plains, only wreaking further havoc on an already devastated Great Depression economy. The lack of native prairie grasses or cover crops to keep the soil in place meant large swaths of formerly productive agricultural land turned to dust and blew away in so-called “black rollers.”

While we have learned a lot about maintaining soil quality since, drought conditions today are nevertheless taking a heavy toll on agricultural productivity, fresh water supplies and the economy—especially as the effects of global warming start to kick in more seriously.

The current drought started in 2012, the hottest year on record in the U.S. with several weeks in a row of 100-plus degree days in various regions. The result was drought conditions for two-thirds of the country. Economists estimate that the dry spell cost Americans some $50 billion in agricultural losses—staple crops including soy, corn and wheat have all been devastated—as well as forest fire destruction and other financial casualties. In fact, this ongoing drought has caused more economic damage all told than Hurricane Sandy. While winter precipitation eased the conditions somewhat, federal researchers believe that more than half the country is still gripped by drought with no foreseeable end in sight and another hot dry summer just around the corner. To wit, California experienced its driest January and February on record, and average winter temperatures across the continental U.S. were 1.9 degrees Fahrenheit above the average for last century.

The National Oceanic and Atmospheric Administration (NOAA) predicts that drought conditions are likely to remain in the central and western sections of the U.S. while expanding in California, the Southwest, the southern Rockies and Texas. The Florida panhandle is also expected to see drought conditions moving into summer. Along with crop losses, the expanding drought promises to bring more wildfires to the west as well as to parts of Minnesota and even Iowa.

While it may not feel like we are living in a dust bowl, the drought does affect all of us, primarily in the pocket book. Reduced crop harvests means higher prices for food items of all kind. Likewise, the cost of piping drinking water to our homes’ faucets is on the rise with freshwater reserves becoming a hotter and hotter commodity. And our tax dollars pay for emergency response missions in the case of wildfires and other warming-related weather disasters.

And just as drought conditions affect each and every one of us, we each have the power to help fix the situation by reducing our own carbon footprints. Only through individual and collective efforts to drive and fly less and switch over to renewable non-polluting fuels can we stem the tide of global warming that is either causing or exacerbating what is beginning to feel like a drought with no end.