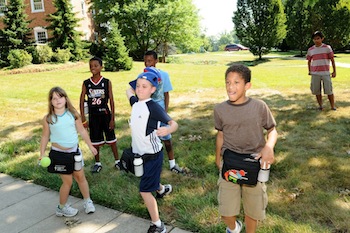 November 21, 2013 (San Diego) -- Dear EarthTalk: Is it true that American kids are going through puberty earlier today than in previous generations, and are there any environmental causes for this?

Research indicates that indeed Americans girls and boys are going through puberty earlier than ever, though the reasons are unclear. Many believe our widespread exposure to synthetic chemicals is at least partly to blame, but it’s hard to pinpoint exactly why our bodies react in certain ways to various environmental stimuli.

Researchers first noticed the earlier onset of puberty in the late 1990s, and recent studies confirm the mysterious public health trend. A 2012 analysis by the U.S. Centers for Disease Control and Prevention (CDC) found that American girls exposed to high levels of common household chemicals had their first periods seven months earlier than those with lower exposures. “This study adds to the growing body of scientific research that exposure to environmental chemicals may be associated with early puberty,” says Danielle Buttke, a researcher at CDC and lead author on the study. Buttke found that the age when a girl has her first period (menarche) has fallen over the past century from an average of age 16-17 to age 12-13.

Earlier puberty isn’t just for girls. In 2012 researchers from the American Academy of Pediatrics (AAP) surveyed data on 4,100 boys from 144 pediatric practices in 41 states and found a similar trend: American boys are reaching puberty six months to two years earlier than just a few decades ago. African-American boys are starting the earliest, at around age nine, while Caucasian and Hispanics start on average at age 10.

One culprit could be rising obesity rates. Researchers believe that puberty (at least for girls) may be triggered in part by the body building up sufficient reserves of fat tissue, signaling fitness for reproductive capabilities. Clinical pediatrician Robert Lustig of Benioff Children’s Hospital in San Francisco reports that obese girls have higher levels of the hormone leptin which in and of itself can lead to early puberty while setting off a domino effect of more weight gain and faster overall physical maturation.

Some evidence suggests that “hormone disrupting” chemicals may also trigger changes prematurely. Public health advocates have been concerned, for example, about the omnipresence of Bisphenol A (BPA), a synthetic chemical in some plastics, because it is thought to “mimic” estrogen in the body and in some cases contribute to or cause health problems. BPA is being phased out of many consumer items, but hundreds of other potentially hormone disrupting chemicals are still in widespread use.

Dichlorobenzene, used in some mothballs and in solid blocks of toilet bowl and air deodorizers, is also a key suspect in triggering early puberty. It is already classified as a possible human carcinogen, and studies have linked prenatal exposure to it with low birth weight in boys. The U.S. Environmental Protection Agency (EPA) has recently made screening Dichlorobenzene for hormonal effects a priority.

Parents can take steps to reduce our kids’ so-called “toxic burden”: Buy organic produce, hormone- and antibiotic-free meat and dairy and all-natural household cleaners. And keep the dialogue going about healthy food and lifestyle habits so kids learn how to make responsible, healthy choices for themselves.