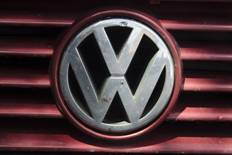 Volkswagen is ponying up $18.2 billion to deal with its emissions cheating scandal, but environmentalists wonder if all the money in the world will be able to save those already negatively affected by the pollution and the wound to consumer confidence. Photo credit: Roddy Scheer.

April 23, 2016 --Dear EarthTalk: What has been the environmental impact of the Volkswagen emissions cheating scandal?  -- Emily Warden, Philadelphia, PA


An analysis by The Guardian last September 2015 revealed that affected VWs in the U.S. are likely emitting between 10,392 and 41,571 tons of toxic nitrogen oxides (NOx) into the air every year, based on typical annual mileage counts. If those vehicles had complied with federal pollution standards, they would have emitted just 1,039 tons per year. Researchers believe Volkswagen has added between 10 and 40 times more NOx pollution into our atmosphere than the U.S. Environmental Protection Agency (EPA) considers safe for people to breathe. According to the Guardian, the 11 million affected diesel-engine VWs on the road worldwide could be emitting some 237,161 to 948,691 tons of NOx emissions annually. In contrast, Western Europe’s biggest electrical power station emits just 39,000 tons each year.

Meanwhile, a study released in October 2015 by public health researchers from Harvard and MIT found that 59 Americans will die prematurely from the excess pollution caused by Volkswagen having cheated emissions tests in the U.S. Researchers calculated the amount of extra particulate and ozone pollution put out by the rigged vehicles between 2008 and 2015 to arrive at their conclusions—and recommend that VW prevent another 130 early U.S. deaths by recalling all affected cars in the U.S. by the end of 2016. The health implications in Europe are even more troubling given that half of the passenger cars on the road there are diesels (including eight million affected VWs), compared to just three percent in the U.S.

According to a tentative deal reached between the U.S. government and Volkswagen in April 2016, Americans may be able to breathe a sigh of relief soon. VW tentatively agreed to compensate some 500,000 U.S. customers who own 2-liter diesel-engine vehicles (including certain Jetta, Golf, Beetle and Passat models) that were rigged to cheat emissions tests. While details are not finalized, VW reportedly has committed to either buying back or fixing the cars to meet emissions standards and providing “substantial compensation”—$5,000 each is a figure floating around the rumor mill—to affected car owners. This deal doesn’t apply to the 90,000 3-liter diesel-engine vehicles in the U.S. implicated in the scandal, let alone the 10+ million other affected vehicles worldwide, but it does establish a precedent and some guidelines which should direct VW’s compensatory efforts moving forward in Europe and beyond.

Environmental groups aren’t letting Volkswagen off the hook just yet, and not only because the company hasn’t agreed to any specifics yet. “The final settlement needs to fix or remove all of the polluting cars still on the road, make whole the consumers who trusted the vehicles were lower-polluting, and compensate for the pollution the faulty cars created,” says Kathryn Phillips, the Sierra Club’s California director. It’s unclear if there is any nod to Phillips’ last requirement—a key sticking point for greens intent not to let the German automaker off the hook—in the as-yet unreleased agreement.

For its part, VW isn’t taking the scandal lightly, recently announcing that it was setting aside $18.2 billion—more than double the amount it originally anticipated—to help fix the situation amid an environment of overall declining sales. Hopefully VW is now committed to solving the problem and will stay on the right side of regulators moving forward, but who knows how many other large industrial companies are skirting rules and spewing dangerous levels of pollution into our skies, land and water?