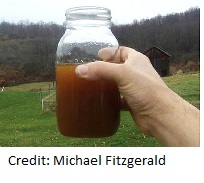 Fracking, short for hydraulic fracturing, is a process whereby drillers blast millions of gallons of water, sand and hazardous chemicals at high-pressure into sub-surface rock formations to create fractures that facilitate the flow of recoverable oil or gas. The technique has proven so effective at reaching previously hard-to-access reserves that it has helped spur a boom in natural gas production around the country.

This influx of domestic natural gas means lower home heating costs and thousands of new jobs in the industry. But opponents point to dozens of fracking-related accidents in recent years and worry that the technique is polluting groundwater and air and poisoning communities—all to get at more fossil fuels when we’d all be better off moving more quickly toward developing clean, renewable energy sources.

While fracking goes on all across the country, the Marcellus Shale, a layer of sedimentary bedding under the Allegheny plateau that spans nine northeastern and Mid-Atlantic States, has become America’s primary fracking grounds. Thanks to fracking and other new extraction techniques, the gas industry is now able to access the natural gas in the Shale and beginning in 2006 commenced big extraction operations in parts of western New York State, Pennsylvania, West Virginia and elsewhere. Geologists estimate there may be as much as 489 trillion cubic feet of natural gas—400 times what New York State uses in a year—throughout the Shale. The race is now on to extract as much as possible as quickly as possible.

But it’s this very gold rush mentality that has led to many so-called “fraccidents” in and around the Shale. The group Earthjustice tracks and publicizes such incidents online via its “Fracking Gone Wrong” campaign. They list dozens of examples of tainted drinking water, polluted air and industrial disasters caused or exacerbated by fracking at or near extraction sites since operations began six years ago.

“Wherever Marcellus development has occurred in Pennsylvania, reports of poisoned water, sick kids and dead animals have followed,” reports Marcellus Protest, an alliance of western Pennsylvania organizations seeking to halt fracking operations. The group coordinates anti-fracking efforts, organizes demonstrations and produces educational materials, including the website MarcellusShale.org, a clearinghouse on fracking and related activism. Its advocacy work helped convince the Pittsburgh city council to ban fracking there back in 2010 and is now working to extend the ban to other areas in the region and beyond.

The controversy has not escaped Hollywood. The 2010 HBO film, Gasland, followed Josh Fox around the U.S. on a quest to find out what impact fracking was having on communities after he was asked to lease his own land for hydraulic fracturing. And a forthcoming Gus Van Sant film, Promised Land, starring Matt Damon focuses on a small farming town that sells its agricultural land to frackers and pays a heavy price in losing a lifestyle and a livelihood while jeopardizing public health. Activists hope these films will go a long way to convince Americans and their elected officials to say no to more fracking.