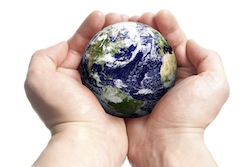 April 14, 2013 (San Diego) – Dear EarthTalk: What would you say are the most important steps we need to take as a nation to counter the impacts of climate change?

Americans care more about the environment than ever before and the overwhelming majority of us acknowledges that climate change is real and human-induced. But still we continue to consume many more resources per capita than any other nation and refuse to take strong policy action to stave off global warming—even though we have the power to do so.

Reducing greenhouse gas emissions can be achieved in a top down manner—via legislation mandating reductions in fossil fuel emissions—or in a bottom-up fashion with individuals and businesses doing their part by driving and flying less, conserving more and embracing greener forms of energy. Environmental leaders would like to see Americans take both paths to cut greenhouse gas emissions as fast as possible.

Individuals need to play a role, too, by altering our behaviors to reduce our individual carbon footprints. NRDC has several suggestions along these lines as well. Walking, biking or using public transit instead of driving is one. If you must drive, make sure for best gas mileage that your car is tuned and your tires are properly inflated. If in need of a new car, look into a hybrid or electric that consumes less or no gasoline.

On the home front, weatherization can go a long way to lower heating and air conditioning needs, thus saving significant amounts of energy. Also, upgrading old appliances to more energy efficient models and switching out old lightbulbs with new compact fluorescents (CFL) or LEDs will keep carbon footprints down. If your utility has a green energy option—with power from wind, solar or other renewables—choose it, even if it costs more than the coal-based electricity. And for things you can’t change there are carbon offsets you can buy that support renewable energy projects that will offset your carbon emissions.

But perhaps the most important tool we have as individuals for battling global warming is our voice. “Send a message to your elected officials, letting them know that you will hold them accountable for what they do—or fail to do—about global warming,” instructs NRDC. On the group’s website you can customize a letter to President Obama urging him to finalize a carbon pollution standard for new power plants, and direct the Environmental Protection Agency to set tough new standards for existing plants.

Environmentalists are optimistic that President Obama will take strong action to fight global warming during his second term. But even if he convinces Congress to pass binding legislation limiting carbon outputs, each of us will continue to play an important role through how we lead our own day-to-day lives.