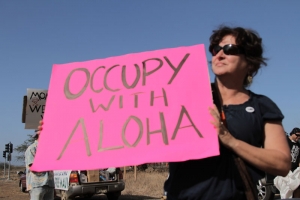 July 24, 2016 (San Diego's East County) - Most of us think of beaches, surfing and luaus when we think of Hawaii. But the constantly warm and moist climate actually provides some of the most productive land in the world with a never-ending growing season. As a result, Hawaii has become a major player in commercial agriculture, and is frequently used to test new farming techniques.

Large agricultural companies moved in on this productivity by using Hawaii for trials of new genetically engineered (GE) crops. Monsanto and DOW Chemical both produce huge numbers of genetically modified seeds in Hawaii for distribution around the world. Some of Hawaii’s more common GE crops include corn, sugarcane, and papaya, among others.

But not everyone appreciates how widespread GE crops are in Hawaii. Many local Hawaiians are upset that their homeland, otherwise a natural paradise, is used for such risky activities. Most GE crops are designed to resist intensive chemical pesticides that kill most other plants. Around the state, vulnerable populations including kids and the elderly have suffered the effects of this type of chemical exposure resulting from the over-spraying of pesticides.

These issues aren’t unique to Hawaii. People all over the world are increasingly wary of GE products, even as the chemical companies insist they are safe. However, the information on long-term effects is still inconclusive. Consumers want to know what’s in their purchases. Chemical companies are denying them this right by refusing to label those products containing genetically modified ingredients.

Unfortunately, the state of Hawaii has hesitated to enact any legislation banning some of their most lucrative business ventures. Responsibility has fallen to the counties. Three Hawaiian counties initiated ordinances and moratoriums against additional GE crops and pesticide use in 2014. However, large companies like Monsanto and Syngenta sued to prevent these measures from being implemented, temporarily postponing these bans. While they did win their initial suit in late 2014, the counties have appealed the decision through the federal 9th circuit court of appeals in a trial which started this past June. The cases hinge on the concept of preemption, i.e. does the county legislation conflict with state rulings? The counties believe that the state’s acceptance of genetically engineered products does not mean that the counties cannot implement their own harsher regulations.

Whichever way the federal 9th Circuit Court of Appeals decides will set an important precedent. If the court decides the federal law allowing GE products preempts the rights of the Hawaiian counties, any future GE bans would likely experience a similar ruling. However, the converse is also true. The judge allowing the counties to construct their own regulations regarding genetic engineering would pave the way for other counties and states to do the same. The cases will hopefully be resolved before the end of 2016. Safe to say, Hawaiians, chemical and agricultural companies and the rest of the nation will be watching.