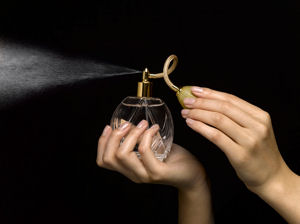 Ahhh...the sweet smell of petrochemicals! The Environmental Working Group (EWG) reports that, while many popular perfumes, colognes and body sprays contain trace amounts of natural essences, they also typically contain a dozen or more potentially hazardous synthetic chemicals, some of which are derived from petroleum. To protect trade secrets, makers are allowed to withhold fragrance ingredients, so consumers can’t rely on labels to know what hazards may lurk inside that new bottle of perfume.

“A rose may be a rose,” reports EWG. “But that rose-like fragrance in your perfume may be something else entirely, concocted from any number of the fragrance industry’s 3,100 stock chemical ingredients, the blend of which is almost always kept hidden from the consumer.”

The Campaign for Safe Cosmetics, a coalition of over 100 groups seeking transparency about chemicals in cosmetics, commissioned independent laboratory tests that revealed 38 secret chemicals in 17 leading fragrances. The top offenders?: American Eagle Seventy Seven topped the list with 24, followed by Chanel Coco with 18 and Britney Spears Curious and Giorgio Armani Acqua Di Gio each with 17.

“The average fragrance product tested contained 14 secret chemicals not listed on the label,” reports EWG, which analyzed the Campaign’s data. “Among them are chemicals associated with hormone disruption and allergic reactions, and many substances that have not been assessed for safety in personal care products.” EWG adds that some of the undisclosed ingredients are chemicals “with troubling hazardous properties or with a propensity to accumulate in human tissues.” Examples include diethyl phthalate, a chemical found in 97 percent of Americans and linked to sperm damage in human epidemiological studies, and musk ketone, which concentrates in human fat tissue and breast milk.

EWG explains that ingredients not in a product’s “hidden fragrance mixture” must be listed on the label, so makers disclose some chemicals but “lump others together in the generic category of ‘fragrance’.”

EWG blames the U.S. government in part, pointing out that the Food and Drug Administration “has not assessed the safety of the vast majority” of secret chemicals used in spray-on products such as fragrances. “Fragrance secrecy is legal due to a giant loophole in the Federal Fair Packaging and Labeling Act of 1973, which requires companies to list cosmetics ingredients on the product labels but explicitly exempts fragrance,” reports EWG. As such, the cosmetics industry has kept the public in the dark about fragrance ingredients, “even those that present potential health risks or build up in people’s bodies.”

For more information, check out EWG’s May 2010 “Not So Sexy” report, available on the group’s website. Also, EWG’s SkinDeep database serves as an evolving source of information on the ingredients (and their health risks) in thousands of cosmetics and related products widely available on store shelves.