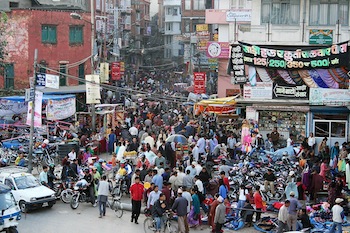 September 5, 2013 (San Diego) – Dear EarthTalk: Is it true that human overpopulation isn’t such a big issue any more as numbers are expected to start declining in a few decades?

Ever since Thomas Malthus published “An Essay on the Principle of Population” in 1798, positing incorrectly that humans’ proclivity for procreation would exhaust the global food supply within a matter of decades, population growth has been a hot button issue among those contemplating humankind’s future. Indeed our very success going forth and multiplying, paired with our ability to extend our life expectancy, has meant that we are perpetually pushing the limits of the resource base that supports us.

When Malthus was worrying about the planet’s “carrying capacity,” there were only about a billion of us on the planet. Today our population tops seven billion. While better health care and medicine along with advances in food production and access to freshwater and sanitation have allowed us to feed ourselves and stave off many health ills, some so-called Neo-Malthusians believe we may still be heading for some kind of population crash, perhaps triggered or exacerbated by environmental factors related to climate change.

But others are less concerned given projections that world population will likely start to decline once the world’s less developed nations urbanize and start lowering their birth rates, as has already happened in Europe, the U.S., Australia and parts of Asia. For example, Europe’s “fertility rate” between 2005 and 2010 was just 1.53 live births per woman (the standard replacement rate to maintain a stable population is 2.1). Without immigration, Europe’s population would already be shrinking.

Of course, the immigration that continues to fuel population numbers in developed countries is coming from somewhere. Indeed, population numbers are still growing in many of the world’s developing countries, including the world’s most populous nation, China, and its close rival, India. Also fertility rates in Africa continue to be among the highest in the world, as many countries there are growing fast, too. Poverty and health problems due to poor sanitation, lack of access to food and water, the low social status of women and other ills continue to cripple these regions. Overpopulation could plague us indefinitely if fertility rates don’t drop in these areas, especially as they ramp up their Western-style development.

Globally, the United Nations estimates that the number of humans populating the planet in 2100 will range from as few as 6.2 billion—almost a billion less than today—to as many as 15.8 billion on the high end. Meanwhile, other researchers confirm the likelihood of world population levels flattening out and starting to decline by 2100 according to the lower UN estimate. To wit, the Austria-based International Institute for Applied Systems Analysis (IIASA) recently unveiled research showing that if the world stabilizes at a fertility rate comparable to that of many European nations today (roughly 1.5), the global human population will be only half of what it is today by the year 2200, and only one-seventh by 2300.

It is difficult to say which way the global population pendulum will swing in centuries to come, given ever-changing cultural, economic and political attitudes and the development demographics they affect. As such the jury is still out as to whether human overpopulation will become a footnote in history or the dominant ill that stands in the way of all other efforts to achieve sustainability and a kinder, gentler world.