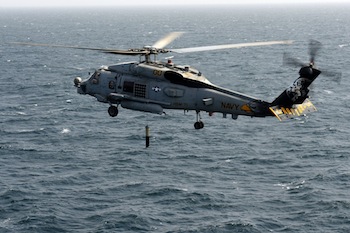 December 11, 2013 (San Diego) -- Dear EarthTalk: I understand the Navy is doing sonar testing and training in the oceans and that their activities will likely kill hundreds if not thousands of whales and other marine mammals. What can be done to stop this?

Active sonar is a technology used on ships to aid in navigation, and the U.S. Navy tests and trains with it extensively in American territorial waters. The Navy also conducts missile and bomb testing in the same areas. But environmentalists and animal advocates contend that this is harming whales and other marine wildlife, and are calling on the Navy to curtail such training and testing exercises accordingly.

“Naval sonar systems work like acoustic floodlights, sending sound waves through ocean waters for tens or even hundreds of miles to disclose large objects in their path,” reports the non-profit Center for Biological Diversity (CBD). “But this activity entails deafening sound: even one low-frequency active sonar loudspeaker can be as loud as a twin-engine fighter jet at takeoff.”

According to CBD, sonar and other military testing can have an especially devastating effect on whales, given how dependent they are on their sense of hearing for feeding, breeding, nursing, communication and navigation. The group adds that sonar can also directly injure whales by causing hearing loss, hemorrhages and other kinds of trauma, as well as drive them rapidly to the surface or toward shore.

In 2007, a U.S. appeals court sided with the Natural Resources Defense Council (NRDC), which had contended that Navy testing violated the National Environmental Policy Act, Marine Mammal Protection Act and Endangered Species Act. But within three months of this ruling, then-President George W. Bush exempted the Navy, citing national security reasons. The exemption was subsequently upheld by the U.S. Supreme Court upon challenge, and the Navy released estimates that its training exercises scheduled through 2015 could kill upwards of 1,000 marine mammals and seriously injure another 5,000.

Luckily, in September 2013 a federal court in California sided with green groups in a lawsuit charging that the National Marine Fisheries Service (NMFS) failed to protect thousands of marine mammals from Navy warfare training exercises in the Northwest Training Range Complex along the coasts of California, Oregon and Washington. In the opinion, Magistrate Judge Nandor Vadas ruled that NMFS’s prior approval of the Navy’s activities there failed to use the best available science to assess the extent and duration of impacts to the marine mammals. As a result of the ruling, NMFS must reassess its permits to ensure that the Navy’s activities comply with protective measures per the Endangered Species Act.

“This is a victory for dozens of protected species of marine mammals, including critically endangered Southern Resident orcas, blue whales, humpback whales, dolphins and porpoises,” says Steve Mashuda, an attorney with the environmental law firm, Earthjustice, which represented the coalition in the lawsuit.

The recent ruling will no doubt be challenged. Also, the Navy still has the green light to use sonar and do weapons testing off the East Coast despite the risks. Concerned readers can send a message through the NRDC website calling on U.S. Secretary of Defense Chuck Hagel to direct the Navy to adopt safeguards to protect marine mammals during training without sacrificing national security.