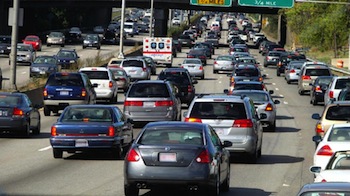 December 4, 2013 (San Diego) -- Dear EarthTalk: Can you discuss pollutants in car interior materials, and also pollution inside cars originating from gasoline and diesel exhausts outside the car?

The interior of your car may seem like a safe haven from air pollution, but it may actually be quite the opposite. Chemicals emanating from the steering wheel, dashboard, armrests and seats mix with the airborne pollution being generated under the hood to form a witch’s brew of toxins for those riding inside.

“Research shows that vehicle interiors contain a unique cocktail of hundreds of toxic chemicals that off-gas in small, confined spaces,” says Jeff Gearhart of the Ecology Center, a Michigan-based non-profit. The extreme air temperatures inside cars on sunny days can increase the concentration of Volatile Organic Compounds (VOCs) and break other chemicals down into more toxic constituents. Some of the worst offenders include airborne bromine, chlorine, lead and other heavy metals. “Since these chemicals are not regulated, consumers have no way of knowing the dangers they face,” adds Gearhart.

Exhaust fumes also find their way into the passenger cabins of many cars. The International Center for Technology Assessment (ICTA) found that concentrations of carbon monoxide (a noxious by-product of internal combustion known to cause headaches, dizziness, nausea and fatigue as well as being a major asthma trigger) may be 10 times higher inside any given car than outdoors along the roadside. ICTA added that in light of the fact that the average American spends an hour and a half driving around each day, in-car air pollution may pose “one of the greatest modern threats to human health.”

To help consumers minimize their exposure, the Ecology Center released the fourth version of its Consumer Guide to Toxic Chemicals in Cars in 2012, comparing over 200 different cars across the 2010 and 2011 model years. Those scoring the most kudos in regard to interior air quality include the Honda Civic, Toyota Prius and Honda CR-Z. The Civic scored first by being free of bromine-based flame retardants (BFRs) in interior components, utilizing polyvinyl chloride (PVC)-free interior fabrics and trim, and having low levels of heavy metals.

Meanwhile, pulling up the rear were Mitsubishi’s Outlander Sport, the Chrysler 200 SC and the Kia Soul. The Outlander finished in last place due to its use of BFRS as well as antimony-based flame retardants in its interior, chromium treated leather components and excessive amounts of lead in seating materials.

“The good news is overall vehicle ratings are improving,” reports the Ecology Center, adding that the top performers have gotten rid of BFRs and PVC altogether in their interiors. “Today, 17 percent of new vehicles have PVC-free interiors and 60 percent are produced without BFRs.”

Consumers can check on their late model car by steering their web browser to the HealthyStuff.org website, the Ecology Center’s free online resource for consumer information. While environmental and public health groups are working to try to get automakers to clean up their interiors, individuals can reduce their exposure by parking in the shade, using interior sun reflectors to keep temperatures down inside the car and rolling down the windows to let the fresh air in.