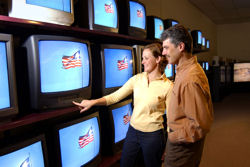 September 18, 2012 -- Dear EarthTalk: I read that a single child born in the U.S. has a greater effect on the environment than a dozen children born in a developing country? Can you explain why?  -- Josh C., via e-mail

It is well known that Americans consume far more natural resources and live much less sustainably than people from any other large country of the world. “A child born in the United States will create thirteen times as much ecological damage over the course of his or her lifetime than a child born in Brazil,” reports the Sierra Club’s Dave Tilford, adding that the average American will drain as many resources as 35 natives of India and consume 53 times more goods and services than someone from China.

Tilford cites a litany of sobering statistics showing just how profligate Americans have been in using and abusing natural resources. For example, between 1900 and 1989 U.S. population tripled while its use of raw materials grew by a factor of 17.  “With less than 5 percent of world population, the U.S. uses one-third of the world’s paper, a quarter of the world’s oil, 23 percent of the coal, 27 percent of the aluminum, and 19 percent of the copper,” he reports. “Our per capita use of energy, metals, minerals, forest products, fish, grains, meat, and even fresh water dwarfs that of people living in the developing world.”

He adds that the U.S. ranks highest in most consumer categories by a considerable margin, even among industrial nations. To wit, American fossil fuel consumption is double that of the average resident of Great Britain and two and a half times that of the average Japanese. Meanwhile, Americans account for only five percent of the world’s population but create half of the globe’s solid waste.

Americans’ love of the private automobile constitutes a large part of their poor ranking. The National Geographic Society’s annual Greendex analysis of global consumption habits finds that Americans are least likely of all people to use public transportation—only seven percent make use of transit options for daily commuting. Likewise, only one in three Americans walks or bikes to their destinations, as opposed to three-quarters of Chinese. While China is becoming the world’s leader in total consumption of some commodities (coal, copper, etc.), the U.S. remains the per capita consumption leader for most resources.

Overall, National Geographic’s Greendex found that American consumers rank last of 17 countries surveyed in regard to sustainable behavior. Furthermore, the study found that U.S. consumers are among the least likely to feel guilty about the impact they have on the environment, yet they are near to top of the list in believing that individual choices could make a difference.

Paradoxically, those with the lightest environmental footprint are also the most likely to feel both guilty and disempowered. “In what may be a major disconnect between perception and behavior, the study also shows that consumers who feel the guiltiest about their impact—those in China, India and Brazil—actually lead the pack in sustainable consumer choices,” says National Geographic’s Terry Garcia, who coordinates the annual Greendex study. “That’s despite Chinese and Indian consumers also being among the least confident that individual action can help the environment.”

Readers can discover how they stack up by taking a survey on National Geographic’s Greendex website. But brace yourself if you are a typical American: You might not like what you find out about yourself.