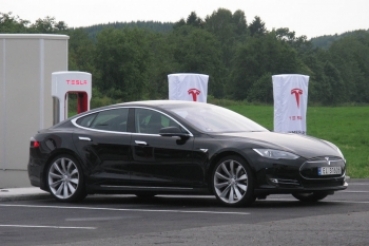 February 19, 2017 (San Diego) -- Dear EarthTalk: I’ve heard that one of the big hurdles to growth in renewables is energy storage. What’s new in the world of battery technologies? And will better forms of storage really accelerate the development of solar, wind and other alternative forms of energy?  -- Maxwell Jay, Erie, PA

It’s true that energy storage has been an Achilles heel in the emerging renewable energy sector, given the large environmental footprint required to produce and distribute our current crop of lithium ion and other types of batteries—and the fact that they do not hold nearly the capacity needed to make intermittent renewable sources (like solar and wind) viable as secure year-round sources of power. Whether or not renewables can replace fossil fuels in the future may well depend on our ability to drastically improve the way we store electricity.

But given the importance of solving this problem, a lot of great minds are working on it. Electric carmaker Tesla is close to finishing construction on a “Gigafactory” in the desert outside of Sparks, Nevada to produce lithium ion batteries for its signature electric cars and its new line of utility-grade and household energy storage appliances. By 2018, the new renewable energy-powered facility will reach full capacity with an annual battery production capacity of 35 gigawatt-hours—and will produce more lithium ion batteries annually than were produced worldwide in 2013. Tesla expects its Gigafactory to shave upwards of 30 percent off battery production costs, and serve as a model for how to mass produce green technology with a triple (social, environmental and financial) bottom line in mind.

But critics point out that merely lowering the production costs for existing technologies by a third won’t provide the quantum leap in storage capacity needed to make intermittent renewables as reliable as traditional “baseload” (e.g., consistent generation) sources such as coal, natural gas or hydropower.

“Many researchers believe energy storage will have to take an entirely new chemistry and new physical form, beyond the lithium-ion batteries that over the last decade have shoved aside competing technologies in consumer electronics, electric vehicles and grid-scale storage systems,” reports Richard Martin, senior editor for energy at MIT Technology Review.

Some of the most promising designs employ cheap and abundant natural materials (such as air, water, carbon, sodium, quinine, and even sand) as catalytic substrates. But Martin points out that there are so many competing technologies “from foam batteries to flow batteries to exotic chemistries, that no one clear winner is attracting most of the funding and research activity.”

He adds that these small start-ups lack the capitalization to get their products ready for the mass market. Setting up a small manufacturing line and testing various combinations of materials to optimize a new battery technology’s potential storage capacity and charge/discharge rates could cost as much as $500 million, but most start-ups in the space can expect investments averaging only about $5 million a year. “That huge investment gap is hard to overcome,” concludes Martin.

For now, Tesla is poised to dominate the world’s battery market with its Gigafactory coming online later this year. But analysts think we’ll have some new alternatives to the lithium ion battery standard within a decade or so, especially if venture capitalists and other investors begin to grasp how important better energy storage options may be to our future.