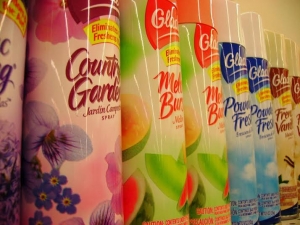 Dear EarthTalk: I’ve heard that, above and beyond our bad eating and lifestyle habits, some chemicals in everyday products are contributing to the obesity problem. Can you explain?

July 9, 2014 (San Diego)--Obesity is a huge problem in the U.S. and other industrialized countries. According to the U.S. Centers for Disease Control and Prevention, obesity rates have doubled for American adults and tripled for kids and teenagers aged six through 19 since 1980. Today, 31 percent of American adults and 15 percent of youngsters are classified as overweight.

The rise in obesity and related health problems like diabetes is usually attributed to an abundance of high-calorie food coupled with the trend toward a more sedentary lifestyle, but there is more to the story. A growing number of researchers believe that certain chemicals collectively known as “obesogens” may be a contributing factor to the growing obesity epidemic. Exposure to these chemicals has been shown to interfere with the way we metabolize fat, leading to obesity despite otherwise normal diet and exercise.

Bruce Blumberg, a biology professor at the University of California at Irvine, first coined the term “obesogen” in 2006 after discovering that certain tin-based compounds known as organotins predisposed lab mice to weight gain. In the intervening years, hundreds of research studies have found similar connections between weight gain in humans and exposure to organotins as well as several other common chemicals found in everyday consumer products, agricultural pesticides and even some drinking water.

The National Institute of Environmental Health Sciences (NIEHS) reports that as many as 20 synthetic chemicals—from the BPA in plastic food storage containers and the lining of cans to phthalates used in the manufacture of non-stick coatings to the parabens in many personal care products—have been shown to cause weight gain in humans, mostly from exposure in utero or as infants. These early effects can last a lifetime, permanently altering one’s metabolic “set points” for gaining weight. “If you have more fat cells and propensity to make more fat cells, and if you eat the typical high-carbohydrate, high-fat diet we eat [in the U.S.], you probably will get fat,” Blumberg tells the journal Environmental Health Perspectives.

Adult exposure to obesogens has also been shown to trigger weight gain and other endocrine issues while exacerbating the effects of earlier exposure. Certain pharmaceuticals (including some of the most commonly prescribed antidepressants) have been found to be particularly egregious in this regard. Meanwhile, nicotine, air fresheners and many household cleaning products also contain obesogens. Also, soybeans (consumed by both humans and the livestock we eat) contain a naturally occurring obesogen.

There may not be much we can do about the damage already done, but avoiding obesogens, whether from natural or synthetic, might be the best thing we can do to prevent making our obesity, hypertension, diabetes and other health problems that much worse. Says Blumberg: “Eat organic, filter water, minimize plastic in your life…If there’s no benefit and some degree of risk, why expose yourself and your family?”

Of course, avoiding obesogens alone won’t keep people from getting fat. Eating a nutritious diet and getting regular exercise are as important as ever to keep one’s weight and overall health in check.