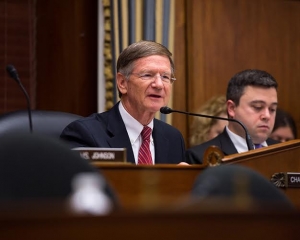 December 20, 2014 (San Diego’s East County) - Given the preponderance of data showing rising temperatures around the globe in recent decades—along with the increasing frequency of extreme weather events—it’s hard to believe there are still any climate change deniers. But a recent survey by the non-profit Center for American Progress found that some 58 percent of Republicans in the U.S. Congress still “refuse to accept climate change.” Meanwhile, still others acknowledge the existence of global warming but cling to the scientifically debunked notion that the cause is natural forces, not greenhouse gas pollution by humans.

One of the chief doubters in the U.S. House of Representatives is Texas Republican John Carter, who reports on his website that the United Nations’ Intergovernmental Panel on Climate Change (IPCC) and the East Anglia Climatic Research Unit in Great Britain—two of the world’s foremost authorities on the extent and severity of global warming—hid their own research results showing that world temperatures have not actually been rising, but in fact have been falling, over the past several years.

“We may or may not even be in a warming cycle,” says Carter. “Even if we are, scientific evidence does not conclude that activity by man plays any significant role.” Regardless, Carter supports more research and development of solar, wind, tidal and geothermal energy, along with the continued development of hybrid, natural gas and all-electric vehicles.

Another outspoken climate naysayer in Congress is House Science, Space & Technology Committee chair Lamar Smith, another Texas Republican, who calls the Obama administration’s 2014 National Climate Assessment (which squarely pins the blame for global warming on human emissions) “a political document intended to frighten Americans into believing that any abnormal weather we experience is the direct result of human CO2 emissions.” He adds that “the Obama administration feels compelled to stretch the truth in order to drum up support for more costly and unnecessary regulations and subsidies.”

Of course, the right side of the aisle in Congress isn’t the only place you’ll find climate change deniers. In a recent op-ed article that appeared on FoxNews.com, scientist and author Daniel Botkin comments that the 2014 National Climate Assessment “ignores...the real history of life itself: endlessly changing, highly adaptable, and never subject to the kind of stasis that the climate change consensus imagines, wrongly, to be Nature’s ideal state.” Plenty of other conservative media voices on Fox News and elsewhere are vocal in their skepticism about humans’ (leading) role in climate change.

But regardless of how persuasive some of these pundits might sound, the facts speak for themselves. IPCC reports that human influence on the climate system is “clear,” with greenhouse gas emissions driven largely by economic and population growth skyrocketing to record levels and leading to atmospheric conditions unprecedented in at least the last 800,000 years. IPCC adds that greenhouse gas emissions are “extremely likely to have been the dominant cause of the observed warming since the mid-20th century” and that warming will be a “very likely” catalyst for increased heat waves, extreme precipitation events, warmer oceans and higher sea levels.

calling people who question or disagree with global warming/man made climate change/ whatever, deniers is hate speech and shows a lack of intelligence and humanity from those who use it. Keep the hate flowing ... show the true colors of the movement
...also refuse to accept that man has changed the climate of the Earth. Long Live Big Brother!