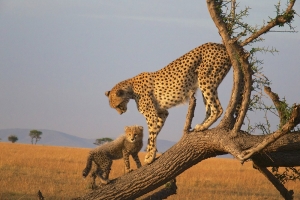 Traditionally, conservation biologists have relied on field observation and sample and statistical analysis to help them understand the dynamics behind species loss, but today genetics is taking on an increasingly important role in helping quantify the biodiversity around us and even save some threatened species.

According to researchers at King Saud University who reviewed various DNA analysis technologies used in wildlife conservation for the Saudi Journal of Biological Sciences, the newly emerging discipline of conservation genetics has proven instrumental in creating better management plans for so-called “genetically deteriorated” wildlife populations. “Accurate classification of these threatened species allows understanding of the species biology and identification of distinct populations that should be managed with utmost care.” They add that DNA analysis can be instrumental in preventing illegal hunting and poaching and “for more effective implementation of the laws for protection of the endangered species.”

One way genetics is being used is to help endangered African cheetahs. “The 10,000 that are left share 99 percent of their DNA between individuals,” reports biologist and blogger Christina Smyth, adding that the low genetic diversity makes the cheetah population highly susceptible to disease and extinction. “By using genetic analysis to look at how closely related individual cheetahs are, cheetah breeding projects are able to breed selectively as an attempt to reintroduce genetic variation back into the population.”

Another favorite example of Smyth’s is how geneticists are helping estimate past population sizes of whales to help manage and conserve current populations. “They are using current levels of genetic diversity along with known mutation rates to look at what the whale population was like before whaling. So far their numbers have increased previous estimates by up to ten times! These numbers could completely change our thoughts and approaches to whale related conservation and management.”

The non-profit Revive and Restore is best known for its advocacy of so-called “de-extinction”—that is, bringing back extinct wildlife species and reintroducing them to the landscapes they used to call home—but also aims to provide “genetic assistance” to existing threatened wildlife species.

“Endangered species that have lost their crucial genetic diversity may be restored to reproductive health,” reports the group. “Those threatened by invasive diseases may be able to acquire genetic disease-resistance.” The group is hoping to apply what it learns from a pilot project restoring genetic diversity to an endangered population of black-footed ferrets to other species’ recovery efforts.

EarthTalk® is produced by Doug Moss and Roddy Scheer and is a registered trademark of Earth Action Network Inc. View past columns at: www.earthtalk.org. Or e-mail us your question: earthtalk@emagazine.com