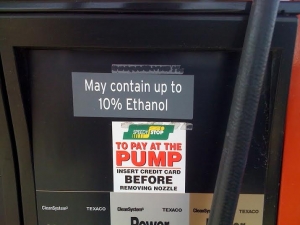 U.S. corn producers started ramping up ethanol production in 2007 as a result of President George W. Bush’s Renewable Fuels Standard (RFS), which mandated an increase in the volume of renewable fuel to be blended into transportation fuel from nine billion gallons in 2008 to 36 billion by 2022. Ethanol now makes up 10 percent of the gasoline available at filling stations.

But environmentalists now say that the promise of ethanol has turned out to be too good to be true. For one, there is the issue of net energy produced. According to Cornell University ecologist David Pimentel, growing and processing corn into a gallon of ethanol requires 131,000 BTUs of energy, but the resulting ethanol contains only 77,000 BTUs. And since fossil-fuel-powered equipment is used to plant, harvest, process and distribute ethanol, the numbers only get worse.

The non-profit Environmental Working Group (EWG) warns that continued production of corn ethanol is not only “worse for the climate than gasoline” but also bad for farmers, the land and consumers: “It is now clear that the federal corn ethanol mandate has driven up food prices, strained agricultural markets, increased competition for arable land and promoted conversion of uncultivated land to grow crops.”

Additionally, the group reports that previous estimates “dramatically underestimated corn ethanol’s greenhouse gas emissions by failing to account for changes in land use,” citing a 2012 study documenting the conversion of eight million acres of Midwestern grassland and wetlands to corn fields for ethanol between 2008 and 2011. “These land use changes resulted in annual emissions of 85 million to 236 million metric tons of greenhouse gases,” says EWG. “In light of these emissions, many scientists now question the environmental benefit of so-called biofuels produced by converting food crops.”

Given the potential negative impacts of so-much corn-based ethanol, the U.S. Environmental Protection Agency is reportedly weighing a proposal to cut the amount currently required by law to be blended into gasoline by 1.39 billion gallons. If the federal government decides to do this, it could lower U.S. carbon emissions by some three million tons—equivalent to taking 580,000 cars off the roads for a year.

Meanwhile, researchers are trying to develop greener forms of ethanol, but none are ready for market yet. “The lifecycle emissions of ethanol ‘from seed to tailpipe’ depend on how the ethanol is made and what it is made from,” reports the Union of Concerned Scientists (UCS). The best ethanol, they say, can produce as much as 90 percent fewer lifecycle emissions than gasoline, but the worst can produce much more. So there still may be room for ethanol in our energy future, but not if we keep doing it the way we are now.