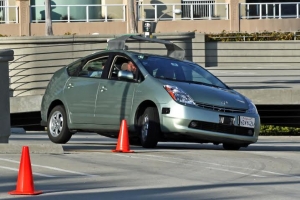 Proponents argue that driverless cars—also called “autonomous cars”—are inherently more sustainable than their manned counterparts. For one, they say, once they are widely available many of us will forego owning our own cars in favor of car-sharing, whereby the autonomous vehicle comes to you, charged and ready to go, as needed. Thus the result could be far fewer cars on the road than today. According to Steve Gutmann of the Seattle-based sustainability think tank Sightline Institute, such a car-sharing scenario would also obviate the need for many parking spaces. Today the typical private car spends upwards of 90 percent of its time parked. Once we have more driverless cars, we’ll need far fewer parking spaces, leading to less land being paved and reducing storm water runoff and heat island effects accordingly.

The networked brains of these vehicles will also reduce inefficient routes and decrease overall driving time, leading to better air quality and lower carbon emissions. Also, the increased safety of driverless vehicles—they obey speed limits, can sense people, bikes and other cars coming toward them, and accelerate and brake much more gradually than human drivers—will mean that the cars can be lighter and require far fewer resources in manufacturing, reducing their overall environmental impact even further.

On the flip side, the advent of driverless cars means that many of us now not able to drive because of age or physical handicaps will be able to use these cars to get around, potentially leading to an increase in the number of cars on the road. And Chandra Bhat of the Center for Transportation Research at the University of Texas points out that just because a car is driverless doesn’t mean we’ll want it to be smaller, lighter and more fuel efficient. He fears that driverless cars will engender a return to larger vehicles because people will want “more comfortable space” when they are free to stretch out, relax, read, videochat, text or even nap during their trips. He adds that driverless cars could lead to more urban sprawl as car commuting becomes more tolerable without the hassle of actually driving.

Bhat also wonders what will become of the public transit systems we’ve invested so heavily in if driverless cars offer the same advantages—using the time en route to do whatever one pleases—with the added benefit of privacy and route/timing flexibility.

Today four U.S. states—Nevada, Florida, California and Michigan—allow driverless cars on their public roads for the purpose of testing; several other states are considering similar allowances. Likewise, in 2013 the United Kingdom began allowing the testing of driverless cars on its public roadways. Besides Google, several leading automakers and other companies have developed their own prototypes. Car enthusiasts can expect to see such examples from the likes of Mercedes-Benz, General Motors, Nissan, Toyota, Audi, Volvo, Tesla and others at auto shows over the next few years, and can look forward to getting “behind the wheel” of one within a decade. Whatever happens, it certainly is going to be quite a ride.