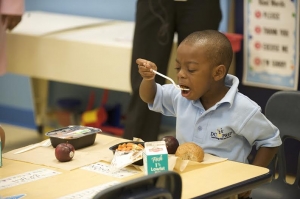 Dear EarthTalk: I hear that many school cafeterias have nutrition standards no better—even worse—than those of fast food chains. What can be done about this?      -- Betsy Edison, Nashville, TN

November 10, 2014 (San Diego's East County) - Americans have done a great job making sure that our kids have something to eat at school regardless of socioeconomic status, with the National School Lunch Program providing low-cost or free lunches to upwards of 31 million students at 92 percent of U.S. public and private schools.

But that doesn’t mean the food has been especially nutritious, and public health experts say it’s no wonder our kids are more obese than ever when we feed them trans fats, salts and sodas for lunch. Kids get half their daily calories at school, so what’s for lunch there has a big impact on health and lasting eating habits.

A 2008 analysis of school lunches by the Institute of Medicine (IOM) concluded that American kids consume very few fruits and vegetables in their cafeterias—with potatoes accounting for a third of all vegetables consumed. IOM also found that kids were eating many refined grains and too much saturated fat and sodium. A 2009 study by USA Today found that meat used by McDonald’s and Burger King was tested for bacteria and unsafe pathogens up to 10 times as much as meat bound for U.S. school cafeterias.

In response to these stark findings, along with vigorous advocacy by First Lady Michelle Obama, things are starting to improve. In 2010, Congress voted to revamp the nation’s school lunch program by enacting the Healthy, Hunger-Free Kids Act (HHFKA). The higher standards in the new law seek to align school meals with the federal 2010 Dietary Guidelines for Americans by upping the availability and portion sizes of fruits, vegetables and whole grains (and requiring students to select a fruit or vegetable), establishing calorie ranges, removing trans fats and limiting sodium levels. The law also incentivizes schools to take part with generous meal reimbursement funds. The new standards went into effect in 2012 and have been working their way through school districts from coast-to-coast and getting rave reviews in the process.

But just because public health researchers think the program is going well doesn’t mean Congress will keep it going. The Republican-dominated House of Representatives has included waivers for school lunch nutrition standards in its fiscal-year 2015 Agriculture Appropriations bill. “The provision would allow schools with a 6-month net loss of revenue to opt out of providing the healthier meals outlined by the HHFKA,” Dr. Jennifer Woo Baidal writes in the New England Journal of Medicine. “A deficit of any amount from any cause could allow schools to return to the same meals that the IOM found in 2008 to be nutritionally lacking.” Consumers interested in protecting the new nutritional standards should weigh in by calling, writing or e-mailing their Congressional representatives and speaking up for healthier kids.