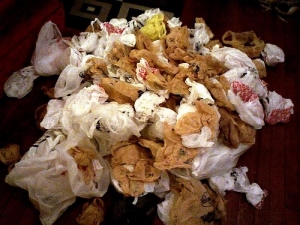 Back in 2007, San Francisco became the first U.S. municipality to ban plastic shopping bags. In intervening years upwards of 132 other cities and counties in 18 states and the District of Columbia instituted similar measures. Of course, Americans are late to the party when it comes to banning plastic bags: The European Union, China, India and dozens of other nations already have plastic bag bans or taxes in place.

But the trend here toward banning plastic shopping bags comes in the wake of new findings regarding the extent and harm of plastic in our environment. Since plastic isn’t biodegradable, it ends up either in landfills or as litter on the landscape and in waterways and the ocean. Plastic can take hundreds of years to decompose and releases toxins into the soil and water in the process.

Littered plastic is also a huge problem for the health of wildlife, as many animals ingest it thinking it is food and can have problems thereafter breathing and digesting. The non-profit Worldwatch Institute reports that at least 267 species of marine wildlife are known to have suffered from entanglement or ingestion of marine debris, most of which is composed of plastic; tens of thousands of whales, birds, seals and turtles die every year from contact with ocean-borne plastic bags. A recent European Commission study on the impact of litter on North Sea wildlife found that some 90 percent of the birds examined had plastic in their stomachs.

Another reason for banning plastic bags is their fossil fuel burden. Plastic is not only made from petroleum—producing it typically requires a lot of fossil-fuel-derived energy. The fact that Americans throw away some 100 billion plastic grocery bags each year means we are drilling for and importing millions of barrels worth of oil and natural gas for a convenient way to carry home a few groceries.

It’s hard to measure the impact of pre-existing plastic bag bans, but some initial findings look promising. A plastic bag tax levied in Ireland in 2002 has reportedly led to a 95 percent reduction in plastic bag litter there. And a study by San Jose, California found that a 2011 ban instituted there has led to plastic litter reduction of “approximately 89 percent in the storm drain system, 60 percent in the creeks and rivers, and 59 percent in City streets and neighborhoods.”

Environmental groups continue to push for more plastic bag bans. “As U.S. natural gas production has surged and prices have fallen, the plastics industry is looking to ramp up domestic production,” reports the Earth Policy Institute. “Yet using this fossil fuel endowment to make something so short-lived, which can blow away at the slightest breeze and pollutes indefinitely, is illogical—particularly when there is a ready alternative: the reusable bag.”