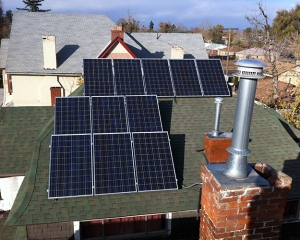 But therein could lie the rub. The federal tax credit for residential solar installations expires in 2016, and it’s anybody’s guess whether and to what extent the Republican-dominated Congress will renew it. Legislative analysts report that while Congress is unlikely to abandon the program entirely, big cutbacks could be on the way. But Deutsche Bank maintains that even if the credit is reduced to 10 percent, solar power would still achieve price parity with conventional electricity in some 36 states by 2016.

Meanwhile, homeowners in states where additional local incentives are available and there’s lots of sunshine—such as across the Southwest—may in fact already be able to power their homes cheaper with the sun than from the grid. Homeowners looking to go solar should check out the Database of State Incentives for Renewable and Efficiency (DSIRE), a free online database of all the different state and local incentives for solar and other forms of renewable energy.

And prices for solar are expected to keep falling as technologies improve and financing becomes more affordable. Solar leasing has helped hundreds of thousands of Americans realize the dream of going solar without breaking the bank. The companies behind such programs—SolarCity, SunRun and others—take care of installation, maintenance and upgrades while the customer ends up paying about as much for clean, green power as for grid power from coal or other fossil fuels.

Of course, solar is still a bit player in the scheme of things in terms of U.S. and global electricity production. But with costs coming down, we can expect to see a lot more solar panels going up on rooftops across the land in the coming decade. Environmentalists concerned about our changing climate say the sooner the better, as our dependency on coal and other fossil fuels for electricity is a big contributor to global warming.

Congress will definitely be considering whether or not to extend the solar investment tax credit when it reconvenes in 2015. If you’re part of the silent majority of Americans who would like to see the credit extended so that middle class Americans can continue to afford to convert to solar power, be sure to speak up and let your Congressional delegation know.