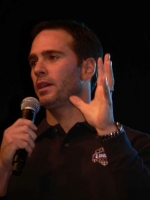 December 22, 2009 (El Cajon) –Jimmie Johnson of El Cajon, the only driver ever to win four consecutive NASCAR championships, has been named Male Athlete of the Year by the Associated Press. The only race car driver ever to with the award since its inception 78 years ago, Johnson received 42 votes from editors of newspapers that are members of the AP, beating out golfer Tiger Woods, NBA star Kobe Bryant, tennis star Roger Federer, Olympic sprinter Usain Bolt and baseball slugger Albert Pujols for the honor.

“The wave is finally peaking, and we don’t know where it’s going to take us,” Johnson said, according to a San Diego News Network (SDNN) report.

Earlier this month, Johnson gained accolades for his charitable endeavors as well as his athletic achievements when he donated half a million dollars to schools in San Diego County, including Granite Hills High, Greenfield Middle and Crest Elementary schools, which he attended in East County. He also gave another half million dollars to out-of-state schools.

Some critics have questioned whether Johnson, a racecar driver should be considered an athlete. But Yahoo! Sports blogger Jay Busbee concludes, “He’s the most successful athlete currently competing right now, and it’s not even close.” Busbee observes that physical demands of the sport include “the intense heat of the car’s interior, the physical strength needed to wheel a car for 500 miles” as well as “mental discipline, ultra-fast twitch reflexes and utter, stone-cold fearlessness that only the best athletes possess.”

Johnson maintains he’s “100 percent” an athlete and says he can run five miles in 34 minutes, 55 seconds, according to SDNN. “So to anyone who wants to head-to-head with me in athletic ability, let’s go,” he challenged.

His fame has attracted HBO Sports’ 24/7 TV show, which will be covering Johnson’s preparation for the 2010 season-opening Daytona 500 with a four-part series. This season, he’s won four of seven races. Next up, he's gearing up to try and win his fifth NASCAR championship.