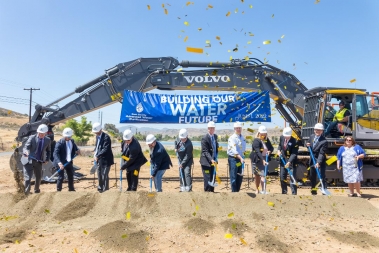 In the works for about a decade, the project will take about 15 million gallons of wastewater now pumped daily to the Pt. Loma treatment plant and put it through an extensive filtration and purification process before it’s sent to Lake Jennings, treated once more, and then delivered to local homes and businesses.

When completed in 2026, the project will provide some 11.5 million gallons daily or about 30 percent of the demand to about 500,000 East County residents. Given the ongoing draught and the ever-increasing cost of importing water from the Colorado River and Sacramento Delta, more Southern California regions are building or have built similar water reclamation systems, even though the estimated costs are scary-looking. 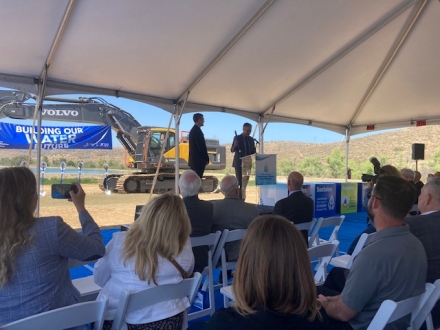 In the past three years, the estimate for AWP has skyrocketed from about $500 million to the most recent increase that pegs it just below $1 billion.

Water officials at the groundbreaking underscored the financial assistance the project has obtained. In all, the joint powers authority (JPA), created to build and manage the system, said it’s lined up about $796 million in low interest loans, and about $130 million in grants to finance the project.

“We are now one step closer to creating a local, reliable and sustainable drinking water source that will reduce our dependence on increasingly expensive imported water,” said Allen Carlisle, general manager for Padre Dam Municipal Water District, as well as the top official for AWP.

Carlisle announced his retirement months ago, and spent his final work day as master of ceremonies for the groundbreaking held at the northern end of Santee Lakes at the Ray Stoyer Wastewater treatment plant. The crowd of 175 gave him a standing ovation at the prompting by incoming general manger and CEO Kyle Swanson.

Early in the planning process, Padre Dam was the sole agency championing the project, but as the cost estimates escalated, it enlisted three partner agencies: the county of San Diego, the city of El Cajon, and Helix Water District. 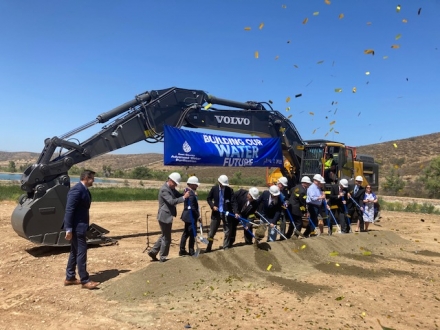 Water officials say without such reuse systems, the cost for water will rise to levels that are simply unaffordable and devastating to the region’s economy. The Metropolitan Water District, the Los Angeles based mega agency that is the largest wholesaler of water in the nation, has been encouraging dozens of its member water districts through financial incentives to undertake similar water reuse projects as East County’s AWP.  Deven Upadhyay, the chief operating officer for MWD, said while about half of Southern California’s water now comes from local sources, the region needs to move toward a future when two-thirds of the water used  comes from local sources.

While the technology and science behind water reuse has been around for decades, the concept remains a heavy lift for many, said David Gibson, executive officer for the San Diego Water Resource Control Board. “It was not very long ago most of us will remember when “toilet-to-tap” was derided as a distraction, and unnecessary and dangerous,” Gibson said. “We can now turn to the future and say this is a key part of our supply. It is where we need to go.”

Going in the same direction, but at a slower pace than the AWP is the city of San Diego, which is building a $5 billion water reuse system called Pure Water in Miramar. Last month, the city threw a monkey wrench into AWP’s  plans when it delayed transferring a pumping station that is a key part of its new system. The city’s chief operating officer said the AWP could allow contaminants into its system

Steve Goble, chairman of the joint powers agency for AWP, said the two agencies are still talking, and was hopeful an agreement can be reached soon. Yet the JPA didn’t hesitate to approve a resolution that could legally allow the JPA to use eminent domain powers to “take” the pumping station.

Besides juicing the billable hours for a small army of lawyers, the latest dust-up proves the truth behind that iconic Mark Twain quote: “Whiskey is for drinking. Water is for fighting over.”