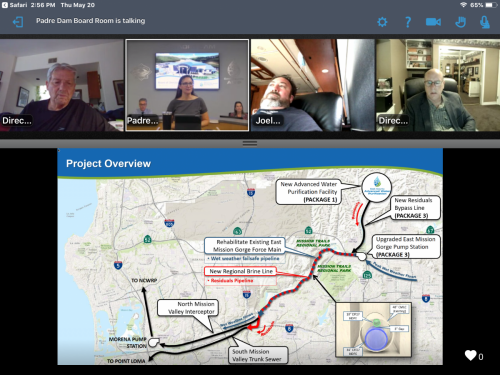 By Mike Allen
May 22, 2021 (Santee) -- The East County Advanced Water Purification Program (AWP), which will provide about a third of the region’s future water needs, is still in the planning stages and final costs are still being refined.
But this week, according to a report by the Joint Powers Authority (JPA) governing the AWP, the project’s total budget was revealed to be $790.9 million. That is a huge increase over the previous estimate of $642 million made less than a year ago, and the $528 million estimate in 2019.

Alan Carlisle, chief executive officer for Padre Dam Water District, one of the four agencies belonging to AWP along with the Helix Water District, the city of El Cajon, and San Diego County, said that figure is misleading and nowhere near what the actual cost will be. 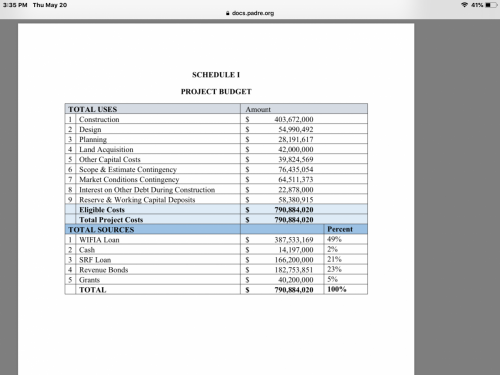 “I can see where you got that because the chart (on page 376 of a 460 page report) has “project budget,’ but that is not going to be the final cost. Those are the eligible costs,” Carlisle said.
It’s very much like a mortgage borrower getting approved for a mortgage loan limit when they are seeking a house to buy, Carlisle said. In order to qualify for the loan made by the federal government, the AWP had to conform to their approval process requirements, he said.
“We’re not going to spend that,” Carlisle said of the hefty budget approaching $800 million. When asked what the final cost will be, he replied that the most recent estimate is at $640 million. But he declined to say what it would be once the project is completed.
“We’re still in negotiations, and I can’t talk about it,” he said.
Doug Wilson, the president of the board of directors for Padre Dam Water District, said when the concept for the AWP was first discussed in 2016, he and other board members knew the project was going to be expensive.
“Yeah, these numbers are scary and they were scary to me from the get-go,” said Wilson, a former general manager of Padre Dam who has been on the board for 11 years.
That is why it was decided early on to seek partner agencies that could share the costs, he said. Hence, Padre Dam joined forces with three other agencies to form the JPA in 2019. 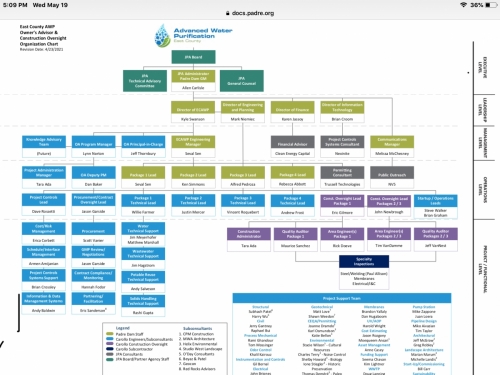 At its May 20th meeting, the JPA officially adopted its 2022 fiscal year budget starting July 1 of $75 million. The vast majority of next year’s budget, $70 million, goes towards professional services, including $48 million for the design builder, the biggest chunk. Other expenses are for engineering, financial services, program management, and other consultants.
The JPA board also heard a report on the largest funding source for the AWP project, the federal government. Thanks to a financing arrangement called the Water Infrastructure Finance and Innovation Fund Act loan or WIFIA, which is operated under the U.S. Environmental Protection Agency, the AWP is getting what amounts to a low-interest loan of up to $387.5 million.
According to the report on the WIFIA loan, it has a fixed rate of 2.35 percent over a term of up to 35 years. That rate is well below the going rate for municipal debt averaging about 4 percent.
Wilson said the loan provides the AWP with an exceptionally low rate, and other favorable terms that will help offset the heavy investment in a major infrastructure project that will help ensure the region has better water reliability than it currently does.
“We’re going to pay for this investment over time, spreading these costs over our current and future customers,” he said. Wilson said that because of the loan and other financing streams the JPA has lined up, it may not have to issue bonds.
Despite the admittedly escalating costs for the AWP, including for a state of the art reclamation plant and a new series of pipes, all the data the agency has today show that by building the project, water reliability will be improved, and ultimately, customers will save money, Wilson said.
“This going to be for their benefit---the rate payers-- or we won’t do it,” he said.
He said the AWP agency is constantly assessing the financial feasibility of the project, and still has a chance to pull out or “get off the off-ramp” next February if new data shows the costs have risen too much. That’s when the agency’s design-builder presents the board with the final cost estimate called the “guaranteed maximum price.”
Carlisle said the worldwide increase in raw materials, particularly steel, is having an impact on the near term estimates but because the project won’t begin construction for at least a year, there is hope the costs will decrease.
“We’re not like San Diego (referring to that city’s Pure Water project which begins construction this year),” he said. “We’re not going to building for another year. We’re hoping the supply chain figures things out, and as a result, prices will go down.”
According to published reports, Pure Water’s estimated total cost is $5 billion, up from a $3 billion estimate in 2014.