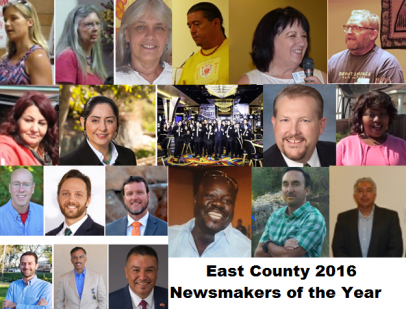 December 27, 2016 (San Diego’s East County) – These are the people whose actions made headlines across our region this year—community leaders and ordinary citizens who worked tireless to help others, whose actions led to changes in our communities, or the promise of changes in the future.

These remarkable women worked together to save lives during the Border Fire. Iris Gardrner, owner of Primeval Farms, sent out a desperate plea for help for animals trapped amid triple digit heat, offering her ranch as a staging area for supplies.  Kim Hamilton, editor of the Deerhorn Valley Antler, answered the call and organizing a relief effort, bringing caravans of supplies to help suffering pets and livestock. Claudia Millerbragg desperately sought help to find a couple missing after the fire.  Julie Salmons was part of a group of volunteers who searched their property and found their bodies.  Despite the trauma of their ordeals, all four of these women have been outspoken in calling for reforms.  They embody the spirit of our backcountry—neighbors helping neighbors in times of need.

STANDING UP FOR THE STANDING ROCK SIOUX:  Bobby Wallace

Thousands of Americans including representatives from hundreds of Native American tribes converged at Cannonball, North Dakota to support the Standing Rock Sioux in their effort to protect drinking water supplies and sacred sites from the Dakota Access Pipeline.  Bobby Wallace from the Barona tribe in Lakeside organized relief caravans laden with warm clothing, blankets, stoves and more, making multiple trips to North Dakota. He told local activists he hoped this would be the start of something big.  The courage of the tribal members standing up to armed authorities shooting water cannons in freezing cold weather made front pages of newspapers worldwide.  In December, those efforts paid off when the Obama administration announced it would reroute the pipeline.  Wallace posted on Facebook, “History was made.”

The CEO of Noah Homes in Spring Valley has emerged as a powerhouse devoted to helping adults with developmental disabilities.  This year, her latest project is spearheading construction of memory care homes to help aging developmentally disabled adults with Alzheimer’s. Who knew that nearly all Downs Syndrome patients who live into their 60s or beyond develop dementia? Nocon knows the needs firsthand, since her brother had a developmental disability. If we could nominate Nocon for sainthood, we would.

Aaron Dean has been the driving force behind organizing the new La Mesa Merchants Association to replace a defunct merchants’ group that had run up debts on civic events and stiffed the city for a hefty sum.  The new organization launched its first event, Holidays in the Village, and has attracted a significant number of new members.  Dean himself owns several restaurants, coffee houses and a brewery in an effort to revive his hometown and create a restaurant row destination in La Mesa’s historic downtown village.

License to Freedom, a nonprofit founded by Dilklwaz Ahmed, had an original mission of helping to stop domestic violence, primarily among refugees and immigrants.  But when Syrian refugees began flooding into East County, traumatized by war, many with multiple children and inadequate resources to start their new lives in America, Dilklwaz Ahmed felt compelled to help out.  Working almost single-handedly, she’s organized food drives, a Thanksgiving feast to welcome the newcomers, and has been working to find local families to mentor each of the new families in our community.  “All people deserve dignity and respect,” she says.

Erica Pinto had big dreams when she took the helm as chair of the Jamul Indian Village.  This year, the tribe’s long-held vision of a casino became a reality.  The Hollywood Casino Jamul-San Diego held its grand opening in 2016, under the management of Richard St. Jean.  The architecture incorporates elements of the natural surroundings plus views from a steakhouse, beer loft and jive lounge.  Pinto hopes casino revenues will help lift tribal members out of poverty. She has also led efforts to give back to the community to help those with hunger, homelessness and addiction issues.  The casino has faced vocal criticism and lawsuits from vocal community members concerned about traffic, alcohol and other issues.  Opening day traffic jams have eased, but only time will tell what the future holds in store for Jamul tribal members, casino patrons, and neighbors of the new venture.

In both Santee and Lemon Grove, voters had choices between two city council members running for open mayoral seats. In Santee, voters chose John Minto, a retired police officer with 14 years’ experience on the Council to keep a steadying hand at the helm. In Lemon Grove, voters made history by electing Racquel Vasquez, founder of Thrive Lemon Grove, as the first African-American woman mayor in San Diego County.  Stay tuned in the coming year to see how these new leaders will make their marks on the local communities they will now lead.  Long-serving Lemon Grove Mayor Mary Sessoms is retiring, while Santee’s Randy Voepel stepped down as Mayor and won a seat in the state Assembly.

NEW FACES ON LOCAL CITY COUNCILS:  All four cities in East County had new members elected, shaking up the status quo.  In El Cajon, voters chose newcomers with business acumen, electing businessman Steve Goble and chamber president Ben Kalasho, a Chaldean American.  Star Bales, an appointed council member also a Chaldean, did not win her reelection bid.)  Santee voters seeking an end to traffic gridlock chose environmentalist Stephen Houlahan over two developer-backed opponents.  In La Mesa, affordable housing advocate and environmentalist Colin Parent won election over long-serving Ruth Sterling, who was injured in a fall and missed a candidate forum.  In Lemon Grove, Republican Matt Mendoza, a former aerospace manager and operations, won a surprising victory in this heavily Democratic stronghold, possibly due to name confusion with incumbent Jennifer Mendoza.  David Arambula, an employment litigation consultant and a Democrat, won the other open seat on the Lemon Grove Council.  What’s missing among the new faces?  Women.  El Cajon and Santee have no female council members and La Mesa, only one.

ALFRED OLANGO:  His death at the hands of an El Cajon Police officer triggered weeks of protest demonstrations, attracting national media coverage.  Olango, a Ugandan immigrant, was reportedly suffering mental distress when his family called 911 seeking help.   No community emergency response team was available at the time, which would have brought psychiatric specialist to the scene. Police released video showing Olango pointing a vaping pen, or smoking device, at the officer who fired the fatal shot while a second officer pointed a Taser at Olango. The shooting has sparked conversations on police handling of people in a mental health crisis, race relations, and police oversight.

Ratepayers beleaguered by stiff water rate hikes swept two long-term incumbents out of office in the Helix Water District.  Mark Gracyk ran on a platform of opposing water rate hikes.  Tejea, a former district employee, has cast himself as a whistleblower knowledgeable about construction controversies involving past district actions.  Their election gives the board a pro-consume majority, with two members who voted against recent rate hikes and two new ones who have pledged to also stem the tide of rising rates, to the degree it’s possible to do so while covering actual water costs.