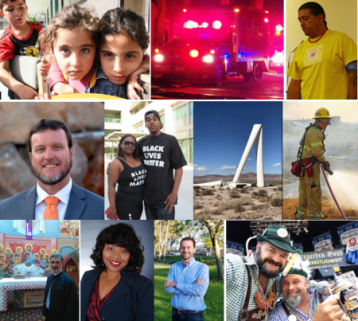 December 24, 2016 (San Diego's East County ) --It’s been a tumultuous year across our nation and our world. East County has also seen many changes in 2016.  Here are the top stories locally that most impacted our local communities in San Diego's inland region this year--many of which may result in more changes in 2017 and beyond:

Elections:  Voters showed determination to change the status quo with the election of Donald Trump as President.  East County also saw unprecedented changes on Election Day, including ouster of two long-time members of the Helix Water District Board due to a ratepayer revolt over rate hikes.  In Lemon Grove, voters elected Racquel Vasquez, the first African-American woman mayor in San Diego County, as well as the first  Hispanic Councilmembers in the city's history:  David Arambula and Matt Mendoza. Santee also has a new mayor, John Minto, plus environmentalist Stephen Houlahan defeated a developer-backed candidate to win a Santee city council seat. Ex-Santee Mayor Randy Voepel is now in the state Assembly.  A Chaldean-American , Ben Kalasho, and businessman Steve Goble were elected to the El Cajon Council. In La Mesa, affordable housing advocate Colin Parent beat out a Councilwoman with 24 years of service. There are also two new faces on the Grossmont Union-High School District, both backed by a teacher’s union.  Time will tell what  new policy initiatives these newcomers may introduce.

Police shooting:   The shooting of Alfred Olango, an African-American man, by an El Cajon Police officer prompted weeks of civil unrest across the city.  In an unprecedented move,  police and District Attorney Bonnie Dumanis swiftly released a video showing Olango pointing a vaping pen at the officer.  But the incident sparked racial tensions as well as serious questions over how police respond to individuals suffering a mental health crisis. The shooting led to a lawsuit against the city as well as renewed calls for formation of  a citizens police oversight commission, an action that a Grand Jury recommended even before the shooting occurred.  With two new council members, watch to see whether calls for new oversight and procedures will be heeded.

Border Fire:  The Border fire burned over 7,600 acres, destroying five homes and 11 outbuildings, also claiming two lives.  While residents praised firefighters for preventing even greater losses, many voiced outrage over issues involving animals trapped in the evacuation area and failure by law enforcement to launch a timely search for a missing couple whose bodies were  found by volunteers, huddled between boulders behind their Potrero home.  East County Magazine’s  investigative reports raised serious questions about actions by public agencies and whether the official report whitewashed legitimate concerns.  Some agencies rose to the challenge to offer real improvements, while others offered only token changes.

Standing Rock Sioux:  Local Native American tribes organized support for the Standing Rock Sioux efforts to halt the Dakota Access Pipeline and protect the Missouri River. We interviewed Bobby Wallace from Barona, who led relief caravans of supplies to the site where thousands of water protectors braved bitter cold and abuse at the hands of private security guards and police, including water cannons fired in freezing weather, tear gas, dogs and rubber bullets.  The efforts of over 300 tribes nationwide, veterans and other supporters yielded fruit when President Barack Obama’s administration announced plans to reroute the pipeline and protect clean drinking water. But the victory may be short-lived;  Trump owns stock in the company building the Dakota Access Pipeline and one of his key appointees serves on its board of directors, leading to fears that he may overturn Obama’s action.

New merchants group forms in La Mesa:   After the defunct La Mesa Village Merchants Association defaulted on large debt to the city over costs for security at major festivals that it formerly ran, the city stepped in temporarily to sponsor Oktoberfest in 2016.  But now a new organization, the La Mesa Village Association, has formed led by Aaron Dean.  In December, it revived a community tradition:  Christmas in the Village, now renamed Holiday in the Village.  That’s not all that’s new:   La Mesa dedicated its Centennial Legacy Project downtown.  The community also has a host of new restaurants and a brewery opening up soon, bringing new life to this historic city.

Hollywood Jamul Casino opens:  Opening of the Hollywood-Jamul Casino fulfills a decades-long dream for Native American tribal members, but a loss for community residents who fought to stop the project over concerns about traffic dangers on Highway 94 and loss of rural character. Opening day saw traffic delays of several hours, but since then the traffic problems have improved.  Opponents are still fighting to block a permanent alcohol license due to fears of drunk driving and a court challenge to the casino itself remains. Time will tell whether the casino can succeed financially and whether turbulent relations between the tribe and neighbors can someday be healed.

Wind turbine collapse in Ocotillo:  Collapse of a massive wind turbine in Ocotillo has been blamed on a blade failure, according to the manufacturer.  But residents contend that the project is a  public safety hazard,  since this is the third major failure at the project . Previously, a turbine burst into flames and another hurled a multi-ton blade onto a public trail.  The project has also failed to produce the power promised each year since its inception in 2013.  Now State Senator Ben Hueso is asking some tough questions of the project’s developer and the Bureau of Land Management about this energy project on our public lands.

Syrian refugees:  Over a thousand Syrian refugees fleeing war and genocide have arrived in San Diego’s East County, hoping to build new lives in America. But the government has not provided enough resources to meet their needs,  leaving some who have already survived unspeakable traumas  to fear that they and their children may soon be homeless.  Some nonprofit groups are pitching in to help,  seeking support and donations from community members to help the new immigrants succeed despite strained local resources.  Meanwhile Trump has said he wants to cut off new  Syrian refugees from entering the U.S.  once he is sworn is as President.

Tule Wind approved for McCain Valley:   Environmentalists and residents have filed suit seeking to stop construction of Tule Wind after the state and federal government approved its construction on  a federal recreation area and adjacent state lands in scenic McCain Valley.  Federal approval of 30-year-take permits for wind developers to harm eagles without penalties also greatly concerns wildlife experts in the region.  A wild card will be whether or not the Trump administration will continue wind subsidies that make such projects profitable for wind energy companies such as Iberdrola, the Spanish utility giant behind Tule Wind.

Chaldean priest ousted:  In 2015, Pope Francis heeded requests from parishioners at St. Peter’s Cathedral in El Cajon and intervened to spare Father Noel Gorgis from orders that would have sent him to Iraq.  But this summer, a change in bishops led to a new order ousting Father Noel from the local parish.  Father Noel contends that he is needed here to help Iraqi refugees. He has  continued to minister to local Chaldeans through underground masses held at private homes.  Whether the pope may yet intervene again, or whether the action will lead to a permanent rift in the Chaldean church, remain to be seen.

Zika virus:  Travel warnings have been issued for countries across South America, Central America and the Caribbean after thousands of babies were born with microcephaly and brain damage to mothers who contracted Zika virus during pregnancy.  Spraying to eradicate mosquitoes that can carry Zika virus were done in several San Diego communities in 2016, including Lemon Grove and Spring Valley in East County after travelers diagnosed with Zika returned home.  But thus far, no locally transmitted cases of Zika have occurred.

Homelessness:  After a grand jury admonished East County cities for not doing enough to help the homeless,  a new task force was formed to address East County homeless issues.  By year’s end, El Cajon began dispatching social service workers along with police officers to try and assist the homeless,  including a growing number of young people on the streets. Other cities took lesser steps toward addressing homelessness issues.  The problem is only apt to increase in East County, as San Diego cracks down on its homeless population, forcing some to relocate into other areas including East County.

Lakeside sand mine:  Following community concerns,  the company seeking to open a sand mine in Lakeside’s El Monte Valley submitted a revised and scaled back proposal. But residents are still virtually unanimously opposed—fighting back by doing their own studies to find species never before seen in El Monte Valley in hopes of preventing noise, traffic ,and dust that may contain Valley Fever spores if the mining is approved.  Whether their efforts can succeed remain to be seen in 2017. If the developer doesn’t win approval for construction and defaults on payment due at year’s end to Helix Water District, the District will have the option to take back the land—an action two newly elected Helix bard members both say they would support.

Marijuana measures:   Voters in La Mesa and Lemon Grove approved measures to legalize, tax and regulate medical marijuana. Meanwhile, voters statewide approved legalization of recreational marijuana, allowing residents to grow up to six plants per household immediately, though fulli implementation won’t  roll out until 2018. As cities grapple with how to zone and regulate pot, protect public safety and spend cannabis tax revenues, one big wildcard remains:  whether or not the Trump administration will enforce federal law that prohibits marijuana as a schedule one drug.

Overturning Forest Conservative Initiative:  The Forest Conservative Initiative passed by voters expired due to a sunset clause.  Late this year,  Supervisors approved allowing limited development on lands formerly protected by the initiative in the Alpine and Descanso areas. Alpine is also set to have hearings next year on General Plan updates that could change the face of the community for the future.

Cleaning up Cleveland National Forest:  A reader’s video prompted  an East County Magazine investigation, which resulted in a County order to clean up illegal dirt dumping in Cleveland National Forest.  The dumping had gone on for years, but after we alerted Supervisor Dianne Jacob, the mess at the headwaters of Boulder Creek, which feeds our region’s most spectacular waterfalls, was cleaned up within a week.

Rain!  After five years of drought, water restrictions were eased mid-year thanks to rainfall and consumers who did their part to help conserve water. Now a December deluge can only further  improve water supplies locally and statewide.  But with climate change posing a perennial threat of wildfires and tens of thousands of dead or dying trees, will this prove to be too little, too late to save our forests? Will the rains be only a temporary respite, or will we see an end of drought declaration?  Time will tell.