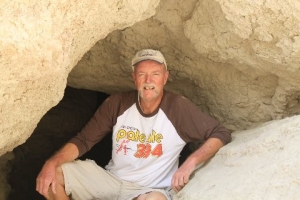 August 8, 2015 (Anza-Borrego Desert)—I'm always up for a new outdoor adventure--especially something I haven't done in my own back yard (our East County). I was treated to one yesterday when Kyle (his third trip there) took me spelunking (Caving) at the Mud Caves in Anza-Borrego desert. WOW, what a cool (no pun intended) adventure; it was only 103 degrees yesterday in our desert, but was a whopping 106 the day before. I was a bit apprehensive about going, (Kyle's been threatening to take me for some time now) not liking the fact of a tight crawling space in a dark, unfamiliar place. But once I got started it was awesome--and about 30 degrees cooler! 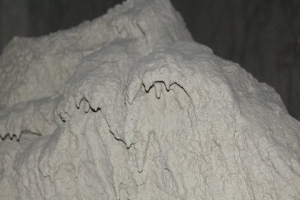 Snaking in and out of the mud caves was just slightly over a mile long round trip. The top photo is at the entrance of the cave. The entrance was tight, but once inside you could walk upright for most of the cave. There were some places I had to take my backpack off and get on my hands and knees and crawl for a bit to get to the next area. But I was with a pro and felt pretty safe. 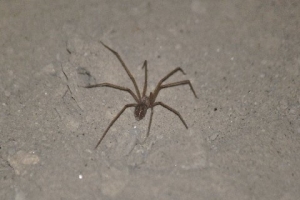 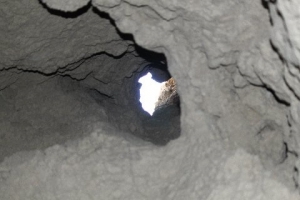 It is extremely hard to find the location of these caves unless you know where your going--six miles off the main road, on a dirt road to get to the caves. If you’re with someone with experience, not a problem - but the surroundings can look very much the same to a novice and you could get lost. Not lost - lost, (like the Malaysia plane MH 370) but maybe a few extra hours spent trying to find the way back!  Here are some photos of the day: cave spider, and desert iguana. Enjoy the great outdoors spelunking. 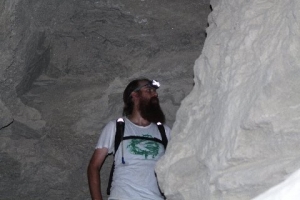 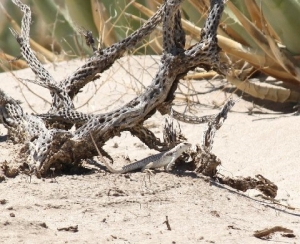 Editor’s note: You can read more about these spectacular caves here:  http://www.desertusa.com/anza_borrego/Mud_Caves.html The Arroyo Tapiado Mud Caves include some that are over 1,000 feet long and up to 80 feet high in the dramatic badlands formations of the Anza-Borrego Desert State Park.  If you do go spelunking, bring a friend and always let someone know where you are going. While this can be a spectacular adventure, there was a recent tragedy here where a young man fell when a section above a mud cave collapsed and he was not found until too late. I also had a friend become lost in a cave once when rainfall occurred, a situation from which he narrowly escaped.  Make sure no flash floods are forecast before you go.