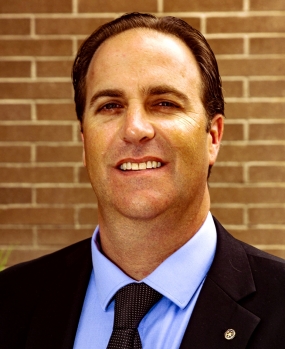 May 17, 2019 (San Diego's East County) – The San Diego East County Chamber of Commerce has announced the appointment of San Diego native Rick Wilson as its new president and CEO.

“The Board of Directors would like to express our heartfelt gratitude for Joe’s willingness to accept the leadership role on an interim basis and serve after Eric’s very successful, multi-year tenure,” said Cameron Stewart, 2019 Chamber board chairman and president of Pure Light Cleaning Specialists. “We are looking forward to Rick’s leadership and talent at such an important time in our growth as we continue to help all businesses in the community to thrive.”

“I am thrilled with the opportunity to continue the momentum and serve the Chamber members as we support the overall business community and improve business competitiveness,” said Wilson, 47. “The Chamber has a robust future with a dynamic staff and a highly engaged board. I will initially spend time talking to people, listening to their concerns and needs and how the Chamber can support them in any way.”

“I have the upmost confidence and respect for Rick Wilson,” said Mackey, founder, president and CEO of XL Staffing Service, Inc. and Excell Security. “He brings incredible energy and dynamism to the job, with great past experience at directing and leading economic development. He will do a great job setting the future direction for the business community through economic development, public policy advocacy and success for all small business.”

Chamber officials said Wilson was selected for the top Chamber post after a national search that drew dozens of applicants. He has 23 years of experience in leadership, supervision, fiscal management, fundraising, philanthropy, program development and operations. His first day at the East County Chamber was Monday, May 13.

Wilson joined the San Diego East County Chamber after recently serving as the executive director of the Liberty Station Community Association and Liberty Station Improvement Association. Previously, he served for 16 years with the Mission Valley YMCA in several management positions, including executive manager and senior facilities director. With the YMCA, he oversaw daily operations, training and fundraising, along with construction for several capital improvements.

Prior to the YMCA, Wilson served for six years as facilities manager for the San Diego Chargers, and oversaw the construction and maintenance of the team’s 15-acre training facility in San Diego’s Murphy Canyon area. After graduating from the University of California at Santa Barbara (UCSB), he worked for three years as assistant building manager for the UCSB Recreation Center and Aquatics Complex.

Wilson was born at San Diego Naval Hospital and grew up in Imperial Beach. He graduated from Mar Vista High School in Imperial Beach. He later earned a master’s degree in business administration from National University. He is a member of the Old Mission Rotary Club and has served on its board since 2003.

The 600-member San Diego East County Chamber of Commerce, based in El Cajon, is one of the largest business membership and advocacy groups in the region. Its members reside and work throughout San Diego city and county. The Chamber’s service areas include the cities of El Cajon, La Mesa, Lemon Grove and Santee and the unincorporated communities of Lakeside, Ramona, Alpine, Rancho San Diego, Jamul, Julian, Santa Ysabel, Spring Valley, Granite Hills, Laguna, Crest and the Mountain Empire communities. Its mission is to be the respected voice of and advocate for improving business opportunities, public policy and business relationships throughout San Diego County. To contact the East County Chamber, visit www.eastcountychamber.org.