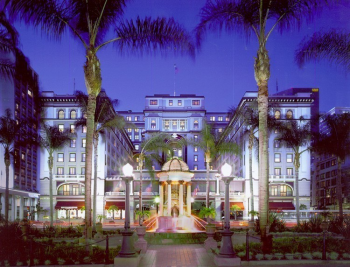 January 15, 2012 (San Diego’s East County) -- The San Diego East County Chamber of commerce celebrates 100 years of service to the business community with an elegant gala on February 4. The soiree of the century for East County business leaders will be held at the opulent U.S. Grant Hotel in San Diego.

Named for President Ulysses S. Grant, the hotel has a strong East County tie: it is owned by the Sycuan tribe of the Kumeyaay Nation. Sycuan invested $56 million restoring the national historic landmark hotel to its former grandeur. Located on land once home to the Kumeyaay, the Grant has hosted presidents and celebrities, ran a speakeasy during Prohibition, and became a hallmark of women’s rights in an event known as the "Grant Grill Invasion."

The Kumeyaay recognize Grant as “a rare soul among politicians—forthright and generous, he gave them what so many before attempted to take away: dignity, in the form of land,” notes the history section on the U.S. Grant hotel website.  During his Presidency, Grant disapproved of how Indians had been treated in the West, so he passed an executive order in 1875 setting aside 640 acres of land in Dehesa Valley in San Diego’s East County for the Kumeyaay tribes.  His efforts led the U.S. Governor to later officially recognize the sovereign status of California Native American tribes.

Grant’s daughter-in-law, Fannie Chaffee Grant, purchased the property and deeded it to her husband, the President’s son, who believed San Diego needed a great hotel.  Construction was delayed by the 1906 San Francisco earthquake, which halted supply shipments from the port of San Francisco.  In 1910, the hotel opened as a veritable palace of luxury.

The hotel went through several ownership changes through the years—and infamously operated a speakeasy, the Plata Real Nightclub, during Prohibition. Liquor was spirited in surreptitiously through underground tunnels holding steam pipes.  With the illicit profits, an ornate ballroom for private society was created, known today as the Crystal Ballroom.

President Franklin Delano Roosevelt delivered one of his first radio addreses from the hotel, which was equipped with the largest radio towers on the west coast, as well as twin presidential suites for the comfort of VIPs.

The hotel became a focal point for women’s rights in 1969, when a trio of female attorneys (Lynn Schenk, Judith McConnell and Elaine Alexander) stormed the Grant Grill, a men-only bastion, and demanded to be seated.  After a year-long battle, the women won, ending discrimination at the establishment.

But by 1979, the grand hotel had fallen into disrepair and faced the prospect of demolition.  Christopher “Kit” Sickels bought it and made major restorations, pinning his hopes that redevelopment of downtown would bring in patrons for the hotel.  But  the rebirth of the Gaslamp District and construction of the new Horton Plaza shopping center across the street came too late. In 1989, he sold it to a Japanese-owned company, Sansei U.S. hotels.

Sycuan Tribal Development Corporation acquired the hotel in 2003 and embarked on an ambitious renovation bridging bridges past and present.  In an uncanny coincidence, throughout its history the hotel has featured a motif with the primrose—the tribal flower of Sycuan and a symbol of life to the Kumeyaay nation. From the bronze banister of the sweeping staircase to the restored plast ceilings in the Crystall Ballroom and the Grand Lobby’s quarter of million dollar carpet, primroses are prominently displayed today in San Diego’s most opulent and historic hotel.

Cost for the Chamber’s gala celebration is $100 and includes valet parking.   Cocktails will be served from 5:30 to 6:30, followed by dinner at 7 p.m. and an awards presentation at 8 p.m. Cocktail attire is suggested. Sycuan Casino is the presenting sponsor of the event at the U.S. Grant Hotel, 326 Broadway, San Diego.

To RSVP or for more information on the event, visit http://business.eastcountychamber.org/Events/details/100th-anniversary-celebration-inaugural-gala. For more fascinating details on the U.S. Grant Hotel, visit www.usgrant.net