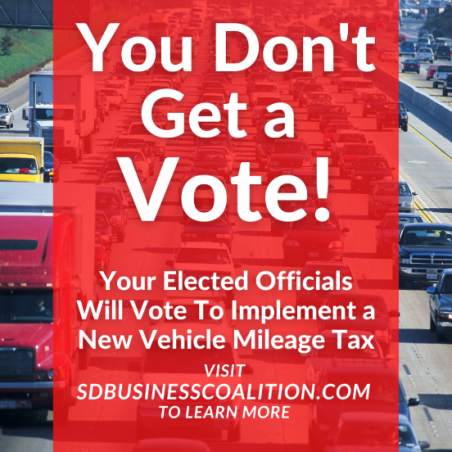 September 30, 2021 (San Diego) – The San Diego Association of Governments (SANDAG) is considering a proposal to tax drivers for every mile driven.  SANDAG leaders say the plan would help fund future transportation needs and encourage use of mass transit. But opponents say it unfairly penalizes motorists in areas such as East County, where many communities lack access to mass transit and drivers have no choice but to commute long distances to work, shop, or attend college.

In 2021, 18 Chambers of Commerce came together to form the San Diego Business Coalition. Their goal is to educate the community and businesses about proposed policies that could negatively impact San Diegans.  The coalition includes the Alpine, La Mesa, Lakeside, Poway, and East County Chambers of Commerce in our region’s inland areas, as well as chambers in San Diego, North County and the South Bay.

The proposed pilot program would then be implemented for all California drivers, the coalition says. Specifically:

The San Diego Business Coalition interviewed San Diego Association of Governments (SANDAG) with pointed questions on the proposed plan. Get details at https://sdbusinesscoalition.com/sandag-regional-plan-update-video/.

The Coalition has also set up a page for residents to voice opposition to the proposed tax and links to contact your representatives on SANDAG:

where you got your information but electric vehicles weigh 25% more then gas vehicles.......https://www.greencarreports.com/news/1122838_busting-7-of-the-most-common-myths-about-electric-cars..... just search for more.
This problem stems from new technology, both electric vehicles, but also mileage improvements using traditional combustibles. I am not against collecting enough in taxes from drivers to have best in the world infrastructure, but the mileage tax is simply an inefficient way to do it. We collect the gas tax at the pump, which is marvelously efficient. It may be the myopia of GPS everything, but why isn't anyone talking about collecting road maintenance taxes at - get ready for it - the charging station? And some are going to point out that electrics are often charged at home, but there is no reason that home auto chargers can't be mandated to report taxable transportation watts too. No? Ok then, how about an annual inspection of the odometer! As smog stations disappear due to the abandonment of fossil fuels for electric, there is no reason not to turn toward odometer reading stations! There is one more important point about physics to make here. Even with electric, lighter vehicles do less damage to the roads and energy efficiency with electric is still valuable, and something that you want to encourage in the tax plan. Taxes at the charging station, or by odometer inspection, can both reflect the weight of the car. A lighter car will use less watts, so less tax. And odometer readings can be linked to vehicle type and weight through DMV registration. A mileage tax requires MUCH more infrastructure, much more computing, much more *reporting*, and therefore more errors to go along with more unnecessary surveillance and punishment of poorer back country people. There are simply better, and frankly more obvious, ways to do this!
Although a little different in the distribution of taxes, we could have a conversation about collecting road taxes from home and business energy bills. Everyone uses the roads whether you drive a car or not. Even if you have everything delivered to you, you depend on the roads for your stuff to be delivered. So there is a strong case to make for eventually putting the road tax onto monthly utility bills. It is MUCH easier than GPS tagging everyone's car.