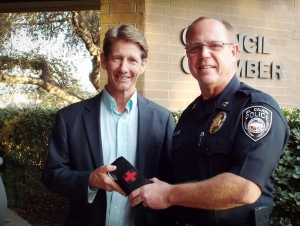 The trauma kits, valued collectively at $4,550, contain critical medical supplies intended to stop bleeding and dress a wound prior to arrival by paramedics or other medical personnel and eventual transport to a hospital. The kits are designed for either self treatment or treatment of a wound by another patrol officer or tactical unit team member. The vacuum-sealed contents include a tourniquet, compression dressing, pressure bandage, hemostatic gauze, scissors, medical tape and gloves.

The new kits will be placed inside the El Cajon police vehicles and serve as a supplement to smaller, compact trauma kits that El Cajon officers currently carry inside a breast plate pocket on their ballistic vest as part of their standard patrol uniform, according to Capt. Jeff Arvan.

Arvan said, “It’s impossible to predict every scenario, but what happens if a wounded officer is pinned inside his own patrol car? There could be a time gap between when officers can secure a scene and when paramedics are allowed to enter and render aid. These new kits are heavier and larger than the smaller trauma kit every officer now carries on their person. In light of budgetary constraints, we are especially grateful for this life-saving donation from the local churches. Not only can we save ourselves, but also citizens.”

Kevin Miller, administrative pastor with Foothills Christian Church, one of the lead churches for the trauma kit donation, said, “We hope these kits are never used, either by officers or citizens. When seconds count, these kits could mean the difference between life and death not only for officers but also citizens.”

Miller noted the kits are similar to ones carried by combat troops in the field designed to stem the flow of blood until the victim can receive medical care. According to military data, major blood loss accounts for nearly two-thirds of preventable combat deaths.

“We are grateful for the resources and support from the many churches in the East County,” Miller said. “This is a practical way we can collectively support and bless the officers who protect our community.”

The donation of trauma kits was accepted by El Cajon City Council at a Jan. 27 council meeting.