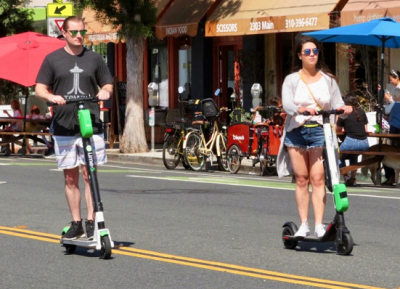 For users, the shared scooters offer low-cost options to driving a car in urban areas and can fill a gap from transit stations to work, restaurants or shopping, also potentially reducing greenhouse gas emissions. Users locate a scooter with a phone app, pay around $1 plus 15 cents a minute, take their trip at up to 15 miles per hour, then lock and leave the scooter, notifying the company with an app where to pick it up. The scooter rental programs also create jobs for people to drop off, pick up and recharge the scooters as part of the “gig” economy.

But what’s viewed as a freewheeling low-cost transportation solution to some, with potential to reduce reliance on automobiles, has created hazards for others due to scooters parked in inappropriate locations, blocking sidewalks, business entries and disabled parking spaces. Medical experts also warn of a rise in serious scooter accidents that have caused serious injuries to riders and people struck by scooters.

“I was run over by one in downtown San Diego a few weeks ago,” Lemon Grove Councilwoman Jennifer Mendoza told East County Magazine, adding that she was walking on the sidewalk when a scooter struck her.  “Luckily no one was hurt badly…But I still they they’re a great idea.” She says scooters “work well downtown for the most part. Workers use them to go out to lunch and run errands, rather than using their car.”

Mendoza says she hasn’t seen many scooters yet in Lemon Grove, but she’s discussed the issue with the city manager. “I’d like to do an ordinance before we contract with anyone,” she said. The Councilwoman envisions potential rules such as requiring scooters to stay in bike lanes, out of parks and off of sidewalks 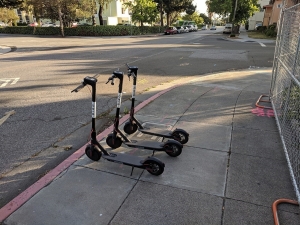 walks is already illegal under state law, but many users are unaware or ignore the law. State law also limits the scooters to adult riders, though some have reported seeing minors on the devices.

La Mesa Councilman Bill Baber announced on Facebook recently that a strange new "bird" had landed in his city. He told ECM that he’s had complaints about scooters being dumped by the Bird scooter company in parking spaces for the disabled. He wants to see La Mesa consider regulations to prevent parking problems and minimize safety concerns.

La Mesa Councilman Colin Parent posted on Facebook, "I'm a big believer that we should have mobility choices, scooters included." 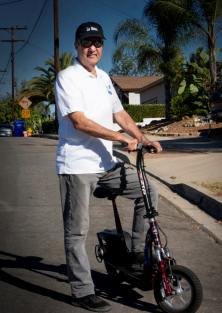 Guy McWhirter, also a La Mesa Councilman, reveals that he's using a scooter for precinct walking in his reelection campaign.  "It works great," he says. "People say `That's cool!'"  But he adds that "hundreds" of scooters have turned up in La Mesa recently, and it's important to make sure they don't block sidewalks or endanger pedestrians.

Photo, right: La Mesa Councilman Guy McWhirter is precinct scooting to minimize walking in his reelection campaign, due to an injured ankle.

Santee Councilman Ronn Hall says he’s seen only a few scooters as well as about 10 dockless bikes “and received as many complaints.”  He says he’s talked with the city attorney to make sure Santee updates its laws to avoid ending up “like Coronado or downtown.” He expects staff to come back to the Council with recommendations by December.

El Cajon Mayor Bill Wells told ECM, “We are in the process of working out a regulation. I asked for staff recommendations at the last Council meeting. We’re looking at what Coronado has done.”

Asked what other options he might consider, Wells said staff will be presenting options. “I’m open,” he said, adding, “I don’t want to take anything from people, but need the companies to be responsible. It feels a bit out of control and we need to protect the city.”

Cities have taken a range of approaches to regulating dockless bikes and scooters, with Coronado at the most extreme end of the spectrum. The beach community doesn’t allow any vehicles in the public right of way without permits and has impounded over 100 dockless bikes, which it announced it would melt down unless companies pay impound fees.

Other cities are working with dockless scooter and bicycle companies, or simply enacting regulations to allow scooter use, with reasonable limits.

The fad began in Santa Monica, which has since creating designated parking spaces for both dockless bicycles and scooters. Some cities, such as Portland, Oregon, have implemented pilot programs limiting the number of scooters and locations where they may be picked up or dropped off. Portland now affixes flyers with safety guidelines to all scooters. Some jurisdictions restrict where they can be ridden or require helmets.

Currently, California state law requires helmets for scooter riders, and one company, Bird, says it’s given away over 40,000 free helmets to riders who request one via app.  But a bill by San Diego Assemblyman Todd Gloria now on the Governor’s desk would eliminate the helmet requirement for adults riding scooters.

That’s got doctors and safety experts concerned.  While there are no national statistics kept on scooter-related injuries, a Washington Post investigative report surveyed doctors at seven emergency rooms across the nation and found a sharp rise in scooter related injuries, including many serious ones such as head injuries and facial injuries among scooter riders.

“Injuries are coming in fast and furious,” Dr. Michael Sise, chief of medical staff at Scripps Mercy Hospital in San Diego, told the newspaper after seeing four severe scooter injuries in one week. “It’s just a matter of time before someone is killed.”

In Mission Beach, an electric scooter crash on the boardwalk caused an 11-year-old girl to suffer a ruptured spleen and a head injury, also hurting her mother.

Liability is another concern. Those injured by scooters generally can’t sue the companies due to binding arbitration clauses, though attorneys say there may be exceptions if an injury was caused by poor maintenance.

Fahin Kamrany, a former Bird mechanic in Santa Monica, says she plans to sue the company after sustaining a head injury testing a scooter with defective brakes. She has stated in media interviews that she found many scooters with sticking accelerators and defective brakes which prevent users from stopping; she has provided emails puublished in media documenting delays getting replacement parts from China.

Those struck by scooters are apt to find that the drivers have no insurance, since car insurance typically won’t cover accidents with scooters.

A petition on Change.org asks the City of San Diego to “choose pedestrian safety over scooter chaos.”  It urges the city to suspend operation of rideshare motorized scooters until a pilot program is established that ensures enforcement, education, compliance, proper infrastructure and places the financial responsibility on the scooter companies.

The petition then lists what could be possible with a pilot program:

Some cities have temporarily banned the scooters, then brought them back after enacting pilot programs.

Some scooter companies have made efforts to encourage responsible operation. For instance, Bird, the original dockless scooter company, tells its customers to ride in bike lanes, not on sidewalks, to wear helmets, and obey all traffic laws, stay off headphones and don’t drink and drive.

With some of the biggest names in rideshare transportation getting into the electric scooter business, the fad doesn’t seem likely to fade away.  Bird was founded by Travis VanderZanden, a former executive at Lyft and Uber.  The startup has been valued by Sequoia Capital at $2 billion in 2018.  Whether profits can be sustained long-term remains to be seen, but the dockless scooter business has now attracted Uber to enter the market and this month Lyft announced plans to launch a dockless scooter division, too.

The challenge for cities locally will be to balance public demands for dockless electric scooters and bicycles as alternatives to cars against needs to protect the safety of the public and safety of those riding the new transportation options.

Retired radio talk show host Stacy Taylor rode one and states, “It was fun! Is it possible I saw on in La Mesa recently?”

But choreographer Spencer Powell had the opposite view. “I hate them!” he exclaims.

Karen Marie Otter, a military veteran writes, “They are a traffic nightmare. They are a nuisance to pedestrians.”

For some, it’s been more than a nuisance. Walter Meyer says, “I have a friend who is in the hospital now after his scooter mishap.” Meyer advised ECM that his friend was riding a scooter and swerved to avoid being hit by a car, then struck a curb and broke his leg bone.

Jon Monday similarly writes, “They are all over Austin, TX - keep them off the sidewalk. Our waiter said he was hit by one, and the guy kept going.”

Rudy Reyes observes that scooters have an “inherent flaw” because companies “can’t provide helmets to each user” but riding without a helmet is not legal in California, he adds.

Robert Hamilton says he’s seeing “too many” dockless scooters at local beaches. “They should be required to be placed in racks and not left anywhere, such as laying down on the sidewalk,” he says. “They should have a speed regulator, or be banned from the boardwalk. They may be convenient and fun, but they are a pain.”

Pati Guzman Cortina offers these suggestions regarding dockless vehicles. “I believe they should have certain park areas and a shut off if they go out of bounds. Too many aren’t being dropped off in front of people’s houses, including bicycles…”

El Cajon planning commissioner Phil Ortiz sees both sides of the issue. “If they do serve a purpose, I think it is only in high tourist areas. They’re fun and convenient in the downtown areas.” He adds,  “If people are not respectful on them toward pedestrians, that is rude. But we shouldn’t ban them because of a few bad apples.”

At least one reader had a change of heart—after taking a scooter for a spin.

Joe Vee concludes, “I didn’t like em…until I rode one." Now he admits, "I have to admit--they’re a lot of fun.”

Does anyone know which is the best product among those listed on this site? https://buyelectricscooternow.com/best-battery-for-electric-scooter/
An absolutely TON of these have shown up in Lemon Grove in the past week. Drove past a park by my house and saw 6 of them sitting in the parking lot. Went down a block 3 more sitting tipped over on their sides in a bush, drove past about another 8 or so on the way home.
As if the rental bikes were not enough of a problem. Operators riding them illegally on sidewalks (like other bicycle riders do already), homeless people removing the locking mechanisms and 'stealing' them for their exclusive personal use. I can only imagine the ensuing chaos coming soon to local neighborhoods. These operators don't care about the California DMV laws or even the right of ways regarding pedestrians and vehicles. I see blatant disregard nearly every day. Who's going to actually enforce the laws regarding operation of these scooters and bicycles anyway? The police? I doubt it. I've witnessed numerous instances of an El Cajon police vehicle (even a bicycle patrol once) ignoring people riding bicycles on sidewalks. even kids with no helmets riding bicycles and scooters. More potential danger for pedestrians to be concerned about. It's a personal safety issue for us, especially seniors.

Stupid broke people without cars, they should man up and get a REAL mode of transportation or walk 5 hours everywhere like me!" -both of you