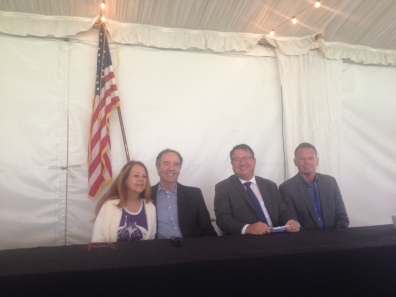 The theme was superheroes; Ironman and Superman from Julie’s Party People showed up. (Go to: http://www.myjuliespartypeople.com/)

Chamber President Eric Lund told everyone, “We’ll be back [at Cottonwood] on October 22 for ‘A Toast to East County.’” There will be wineries, breweries, and restaurants from East County that will be showcased. Supervisor Dianne Jacob will make an appearance.

Then Don Parent from SDG&E said that they will have electric vehicles for people to test drive at the health fair on Saturday June 18. It is called “Ride and Drive” and it will be by BJ’s Restaurant at Grossmont Center.  He also announced that he and Joe Garzanelli from Keller Williams Realty are doing an outreach for St. Madeline Sophie’s Center at Pine Glen course at Sycuan Resort on Thursday November 10.  He then introduced Bolduc, customer engagement outreach manager from SDG&E.

Bolduc began, “I actually grew up in East County. I graduated from Santana.” Then after graduating from UCSD, she moved to La Mesa.  “40% of the state’s greenhouse gas emissions come from transportation. Here, in our region, it’s actually more. We have a lot of traffic.” Governor Jerry Brown signed an executive order, planning for more electrical vehicles by 2025. (See: https://www.gov.ca.gov/news.php?id=17463  and http://www.energy.ca.gov/transportation/zev/pev/). More charging stations have been installed at workplaces and apartments/condos. This has to do with SDG&E’s Power Your Drive program.

“If you look at East County, unfortunately, there are not a lot of public charging stations out here,” she noted.  If someone signs up for the program and they qualify, SDG&E will cover the cost of installation, maintenance, operation, and billing of the electrical vehicle.  Visit the website for more information and to sign up. (http://www.sdge.com/clean-energy/electric-vehicles/poweryourdrive)

Barry Jantz, CEO of Grossmont Healthcare District, then introduced the panel of speakers- Mayor Wells, Mayor Sessom, Councilmember McWhirter, and Councilmember Dale. When Dale was still on his way, Santee school board member Elana Levens-Craig filled in. Each speaker spoke for 1-2 minutes, giving updates on their city, so the public would have more time to ask questions.

Levens-Craig started. “Santee is a wonderful, wonderful community… We have wonderful parks…. Karl Strauss Brewery is coming. The best part is the school district.”

Mayor Wells spoke next. “We’ve re-designed our development staff to make it a one stop, one shop…we’ve streamlined the process.” So the public can get their answers right away, he noted. “We’ve gotten rid of building impact fees to encourage business in the city. There are about 500 residential houses in El Cajon being built this year” which is the most built since the 1970s. He also mentioned the Marriott by City Hall. Also, the Hilton is purchasing the old police station and building a new hotel there. There will be new stores and mixed development at Parkway Plaza.

McWhirter shared updates from La Mesa. “One of the joys I get is talking to people and asking where they live.” $7 million was spent on La Mesa’s streetscape project last year, and rent has gone up. “Our housing market is second to none…it is a charming place…it is a great place to live and to work.”

Dale then spoke and continued on from Levens-Craig. “We’re very grateful for the economic development in town [and] to experience low crime rate…The theme is ‘you can live, work, and play here.’ We continue with the saga of Fanita Ranch…if we do develop Fanita Ranch, it’ll probably be different than we talked about in the past.”

Mayor Sessom rounded up the panel. “20 years ago, I did my first Friday breakfast (which included then Santee Mayor Dale and La Mesa city Mayor Art Madrid)” as a newbie. Now, she was at the breakfast, having gone through it already. “This is my final tour” as mayor of Lemon Grove; she will not be running again in November. “We do consider ourselves the future East Park…now we are doing a health and wellness element” in their general plan. She proudly added that everyone from each of the cities in East County get along so well.

Next was a question and answer session.

Someone asked Mayor Wells about the new El Cajon animal shelter. “’It’s already paid for and it will be built this year…it’ll actually be a state of the art, beautiful, animal facility with heated floors for the animals.”

Another person mentioned when Lemon Grove decided not to connect to the 125 freeway. He wanted to know if the crowd back at that Council meeting was happy with Council’s decision. Sessom told him, “No, the crowd was not happy.” There’s a ramp and bridge over the 125, and the right of way is still there.

Someone else asked about updates on ECPAC and if the Marriott Hotel will partner with the center. Mayor Wells answered, “The East County Performing Arts Center closed five years ago…we just this last week got bids from contractors.” The Council will look at it again this summer and ECPAC is expected to open in 2017, he said. The Marriott will not be a part of it. He added, “My goal is to never close this theatre again” and to hire a professional theatre management company.

A man asked about the speakers’ positions on the proposed SANDAG tax that will go on the November ballot.  Sessom said, “I’ve been on SANDAG for the last 20 years…nobody likes the sales tax… SANDAG folks are very disturbed with this.” But she added that a lot of East County will benefit from it.” There will be more roads and streets. “If this initiative doesn’t pass, nothing will happen in this county including East County.”

McWhirter answered, “Kristine Alessio on our city council works with SANDAG.” All Council members and the La Mesa Mayor opposed this tax. He then stated the reasons for opposition. “Not enough local money will come to La Mesa. It would limit [the city of La Mesa’s] authority in the event of a disaster.” They also wouldn’t want this tax to last long after the council is dead and gone.

Mayor Wells responded, “I also voted no. It was an antagonizing decision. We do need to bring in more money for transportation…it’s very difficult to build freeways now.” A large amount of money would go to mass transportation, and small amount would go to building freeways, he said.

Dale said, “I just finished three years as the chair of SANDAG…today the federal government pays less than 20% on highways. The local region is expected to finance the rest. If you’re okay with the 52 and where the 8 is, don’t vote on it. If you want things to change, vote on it….70% of the community works outside the community…the state of California has a rule that we have to get a certain amount of people on streets” for greenhouse gas emissions. He expressed his support for the tax increase.

Randy Young from Black Angus Steakhouse and former manager of Hometown Buffet wanted to know if there will be a Golden Coral in place of the Hometown Buffets closing in Santee and El Cajon. Wells and Dale weren’t sure. Santee city manager, Marlene Best, told Young that the Silver King Buffet is looking to occupy the former Hometown Buffet building in Santee.

Lund then mentioned SCORE San Diego, a Chamber member, is doing a $20 workshop on doing business as a prime contractor, on Thursday June 30, 9am-12pm, at National University in Kearny Mesa. Go to: https://sandiego.score.org/localworkshops and look for ‘Doing Business with Prime Contractors’ to register.

Then Young and Salvation Army Board Member, Humbert Cabrera, announced that Salvation Army’s Captain Terry Masango and his wife Rutendo will be moving to Pasadena. A new captain will take over at the end of the month. There will be a tribute breakfast for the Captain and his wife at Black Angus Steakhouse in El Cajon, where a $5 donation or more, is requested to help with the new food bank that will be operating every day. The breakfast is on Monday June 20 from 7:30am to 9:00 or 9:30am. The El Cajon Salvation Army location can be reached at 619-440-4683. The website is: http://www.sandiego.salvationarmy.org/sierra_del_mar/elcajon.

Also, there will be a fundraiser, ‘We Care Wednesday’, benefitting the El Cajon Animal Shelter on Wednesday June 15, at the Hills Local Pub, 8758 La Mesa Blvd, 5-9pm. 10% of sales will go towards the shelter. There will be food, craft beers, a silent auction, and drawings.