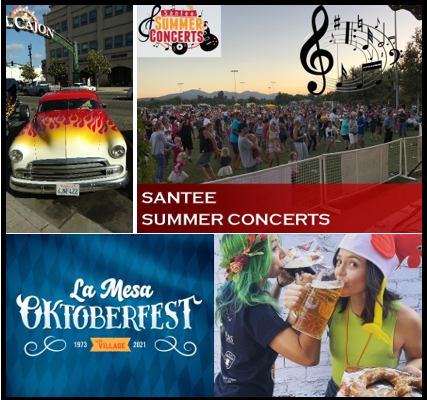 May 9, 2021 (San Diego’s East County) – As COVID-19 restrictions ease, some East County cities and organizations have announced plans to restart community events after a year of shutdowns.

The city of Santee announced the return of its popular Santee Summer Concerts beginning June 24 at the Town Center Community Park. That’s after the June 15 date when Governor Gavin Newsom has announced plans to fully reopen California. The city also plans to hold a dual fireworks event, Santee Salutes on July 4th.

The La Mesa Village Association’s website has a notice that it plans to host Oktoberfest, an event that has drawn tens of thousands of people or more annually October 1-3. The event customarily features live music, dancing, beer gardens and vendor booths.

Julian has announced plans to hold its Taste of Julian self-guided tour of local dining establishments on June 12—and has already sold out tickets.

The County has not yet resumed issuing permits for parades, keeping events such as the Julian Fourth of July parade in limbo, according to the parade website.

The Magnolia, formerly the East County Performing Arts Center in El Cajon, plans to reopen with indoor concerts starting with a September 18 performance by the Monkees, according to the theater’s website.

But some organizations aren’t waiting for state and county health rules to roll out major events, albeit in apparent violation of current regulations.

Downtown El Cajon, a merchants’ group, kicked off its Cajon Classic Cruises last Wednesday, with plans to continue all summer long. The organization also announced return of its Friday night Dinner and a Concert Series. The group’s website states, “We will follow all pandemic safety measures and regulations that are still in effect at the time of each or any show.”

However, this organization does not appear to be following current state guidelines. San Diego is currently in the orange tier, for which the state limits privately run outdoor gatherings to 100, or 300 if everyone present is vaccinated or shows proof of a recent negative COVID test.

While many flocked to downtown El Cajon to enjoy the festivities, some residents raised objections.

“Could El Cajon become a hot spot for the virus?”  asked a downtown El Cajon resident who asked that his name not be published, in an e-mail to ECM after he learned of the car show’s return. “Thousands of people usually attend this weekly event for months. So realistically, Covid has the potential to spread to many other cities.”

The resident also faulted Bill Wells, calling him, “The Mayor of Hell Cajon” for posting a video this week announcing he will no longer wear a face mask after being vaccinated, and for previously indicating that El Cajon would not enforce county health rules regarding business closures or mask wearing in the city.