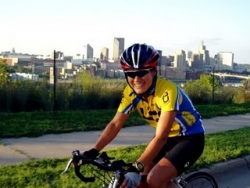 May 27, 2010 (San Diego) – It’s billed as the toughest bike race in the world: 3,000 miles in just 13 days. On June 8th at noon PST, Amy Xu will depart from Oceanside, pedal through San Diego’s eastern regions and ride a grueling 20 hours a day in her quest to become the first solo Asian-American woman to complete the Race Across America (RAAM). She is representing Team Strong Heart—raising funds for Camp Odayin, a special camp for children who have undergone open heart surgery.

For crew member Dennis Richardson of Lakeside, the cause is personal. “My grandson was born with his arteries not connected. They were backwards,” he recalled. “Doctors went in and changed them so they were plumbed right in the first couple weeks after his birth. Now he’s fine-it’s amazing.” 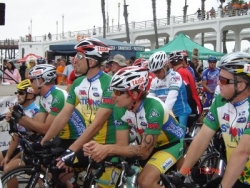 Richardson will be driving a motor home to Annapolis, Maryland, where the race ends. He is crewing with Tim Sandy of Escondido, and a dozen other volunteers including drivers, navigators, a feeder, a bike mechanic, a physical therapist, a massage therapist, and a nurse. The two local residents have been friends since the 1960s and enjoy weekly bike adventures. “We are very excited to be a part of the race team,” said Richardson.

He marvels at the feat that Xu is striving to achieve. But family bike rides, weekend trips or even riding in a triathlon pale in comparison to the prospect of competing in RAAM.

Xu, 41, is an attorney from Minneapolis. “I started as a runner doing marathon running, then got into triathlon on the endurance side—the iron man races,” Xu told East County Magazine.

She learned about Camp Odayin (named after an Ojibwa Indian name meaning “heart”) through coworkers whose children attended the camp, located on a lake in Minnesota. “For me, the mission is to g 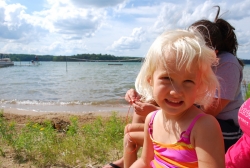 et the word out about Camp Odayin,” said X, who noted that while riding 250 miles a day in a race is tough, kids with heart problems have “a tough life every day.”

The camp provides opportunities for children with heart conditions to swim, ride horseback, and participate in other activities with doctors and nurses on hand to monitor their conditions. Because all of the kids have the same type of scars, they are not self-conscious about being seen in swimsuits.

“Medical costs are so high that many families cannot afford the camp,” Xu said. Funds raised through her race sponsorships will go directly to help kids with heart conditions attend the camp, which is open to children from all over America. Funds will also cover costs for Team Strong Heart in RAAM 2010. 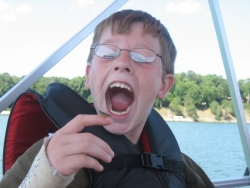 Team Strong Heart, founded by Bernie Karfelein, first participated in RAAM in 2007. In 2008, Xu joined the team, which placed second. The following year, an all-male team took first place. Now in 2010, Xu competes in the solo division. This is the 29th annual event for RAAM.

Xu will ride 20 hours a day, sleeping just two or two and a half hours nightly. The grueling pace requires liquid foods the first several days, since it would be impossible to take in enough solid food to make up for burning off 10,000 to 14,000 calories, said Xu, who also does cross-country skiing and indoor cycle riding to get in shape for the big race.

The race begins in Oceanside and will go through the Lake Henshaw area, then head through the desert, where temperatures may exceed 100 degrees. Xu hopes to reach the Arizona state line on the first day.

She will have three bicycles on the race, each around $6,000. She must make three cut-offs; the first is in Durango, Colorado by June 12 at 6 a.m. Next she must cross the Mississippi River by the morning of June 17, then reach Annapolis on the east coast by June 21st.

Updates on Xu’s race will be posted at www.teamstrongheartamyxu.blogspot.com