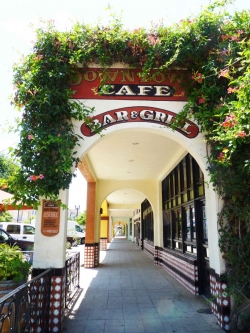 By Ellinoa Blake Last week, after a morning of all work and no play, my editor and I craved escape from the heat wave --and more importantly a bite to eat. We headed into the heart of El Cajon to the aptly titled Downtown Café.  We found welcome relief from the sweltering heat as we swung open doors and stepped into the Downtown Café, a bold corner centerpiece of Main Street rich with vintage flair and historic ambience. We bypassed the original front room, a classic mahogany bar and booths combo that looks like a 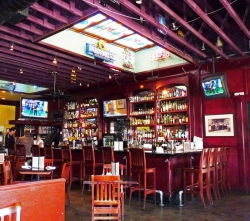 setting out of an old Western film, to explore the restaurant’s expansion into a restored adjacent space. The hustle and bustle of the bar disappeared, and a calming quiet descended over our cozy two-person booth.  An exposed brick wall evoked the building’s historic roots as a feed store, while an open ceiling and wrought iron railing added spaciousness and charm. We were pulled away from admiring the architecture by a friendly waiter, who provided our drinks (Miriam ordered a refreshing Sangria while I stuck with ice cold water). After mulling over the menu and quizzing the waiter on their vegetarian sauce options, I 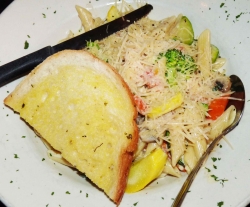 ordered Pasta Primavera.  It arrived sizzling, penne swimming in a delectable white sauce , creamy and rich, mingled with steamed vegetables. Miriam’s salad and crab cakes arrived cool as a cucumber, served with a lemon vinaigrette drizzled over crisp greens,  avocado and tomato slices with risotto.  If you’re  searching for a light protein-packed meal with plenty of veggies, this did the trick. Both meals also came with a thick slab of buttered garlic bread. 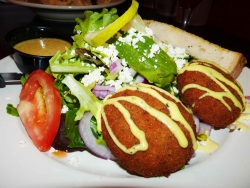 An extensive menu also features a wide range of choices such as salads and soups, fajitas, barbecue ribs, burgers, tacos and wraps, sandwiches, pastas,  hearty entrees, appetizers and desserts, as well as a full drink menu.  After finishing our meal we looked around once more, observing the stained glass skylight crowning the mahogany bar. We took a closer look at the black and white photographs hanging on the brick wall, appearing to have been taken in the early to mid- 1900’s.  The pictures illustrated olden days in El Cajon, which celebrates its centennial this year. 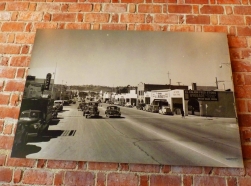 We asked the waiter if the Downtown Café was pictured. Sure enough the corner building in the photo, the El Cajon Feed Store, has transformed today into the friendly café. We saw a staircase winding upwards as well, with a flat plane just above the booths, and both of us took a moment to daydream about a band playing. Miriam commented  that it almost felt like a saloon out of Old Sacramento or a brick-lined jazz club on New Orleans’ famed Bourbon Street.

Fittingly, the Downtown Café hosts numerous events, and can be rented for an evening  of fun. Live musical entertainment is offered many nights; other options include open mike night and sidewalk café viewing of the weekly El Cajon  vintage car show.  As we made our way out the back patio, which for the day was empty due to the heat, yet still had an inviting feel with vines and flowers surrounding it, we felt full and accomplished. 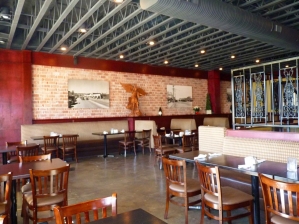 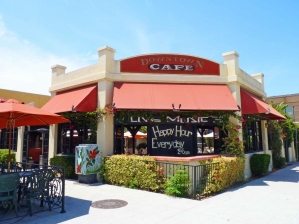