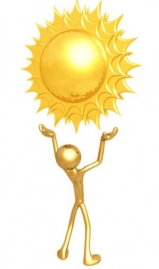 July 25, 2012 (Santee) – San Diego’s Planning Commission voted last week against rezoning open space near Mission Trails Regional Park to install a gas-fired power plant. But the decision can be appealed at City Council.  Residents in Santee and San Diego have voiced strong opposition to the Quail Brush power plant on the site  bordering both communities.

“We have created the San Diego Solar Program to offer a reliable clean energy solution that benefits our local communities,” said Daniel Sullivan, founder and president of Sullivan Solar Power. “Not only are program participants saving money and helping our region meet our energy demands, they are getting paid to do so.”

The one-hour presentation will cover solar technologies, rebates and incentives, and details of the San Diego Solar Program. Call 1-800-SULLIVAN to RSVP or for additional information.

Sullivan Solar Power is working to deploy more rooftop solar energy with a localized solar program offering, as part of the solution.

“If you look to the 122,000 solar rooftops in California, another solution comes to light,” said founder and president of Sullivan Solar Power, “Residential solar power systems can assist with relieving daily demand stress on the grid by providing clean, renewable energy.”

The proposed new natural gas power plant will have a more efficient design than older plants, but opponents of the project note that it is an unwanted structure due to destroying preserved, open space and its heavy polluting capabilities. Community members have voiced concerns about the project not only causing blight to the popular Missions Trail park, but are worried of the noise and pollutants impacting the nearby school and neighborhoods.

Sullivan Solar Power, the top residential solar installer in San Diego Gas and Electric’s territory, per California Solar Initiative data, has worked tirelessly to deploy solar power in the region to deter the need of additional power plants in the community.

To reward those who commit to a clean energy future, Sullivan Solar Power developed the San Diego Solar Program, a countywide cash-back incentive program which enables residents to get paid to go solar. The program started April 2012, and allows residents to go solar for $0 down and receive a cash payment up to $1500 in its current phase. Incentives provided are greater than the current State rebate program.

Sullivan Solar Power is a turnkey solar system provider that delivers solar electric projects from concept to completion with offices in Orange, Riverside and San Diego counties. The company has installed more than 10 million watts of solar power ranging from residential to large commercial and municipal systems. Sullivan Solar Power has a longstanding A-plus rating with the Better Business Bureau, with no complaints filed since its founding in 2004. The firm has been named one of the nation’s fastest growing energy companies by Inc. Magazine and services clients throughout Southern California.  Visit sullivansolarpower.com for more information.