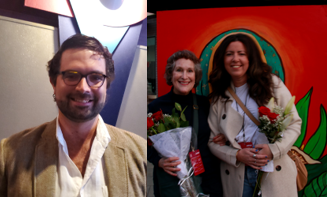 March 21, 2022 (San Diego) – Migrant stories from around the world were poignantly displayed at the San Diego Latino Film Festival on March 15, when finalists in the fourth annual Migrant Voices Today Challenge were presented. The finalists included East County producers and directors as well as stories set in East County.

The Migrant Voices Film Challenge was presented by the Media Arts Center San Diego and the San DIego Union-Tribune.

This year the competition had 14 finalists, more than the 10 finalists in past film festivals, due to the high number of quality entries. Each short documentary film was approximately five minutes long, limiting the filmmakers to focus on a single topic or subject.

The winner for the emerging category was Mesogeios from director Marco Biotto in Italy.  His documentary tells the true story of Fayad Mubarack. It focuses on Fayad wearing a lifejacket as his experiences happen around him for the audience to hear. The film was also featured in the Migration Collective as part of the London Migration Film Festival four months ago. 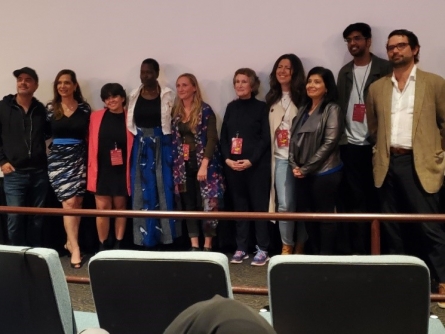 Photo: many of the winning producers and directors were present, speaking to the audience about their films.

The Winner of the professional film category was Notes from a Long Walk by director Franc Gabriel Contrereras. This film focused on the journey of Jean Daniel Ceran as he tells the story of how he travels across South and Central America seeking a better life outside his nation.

In addition to the two winners of the Migrant Voices Competition are a few other noteworthy films.

Among those was a film that caught my eye, Premonition, from director Sandeep Parupudi. Although a documentary, it took on a very cinematic take on telling a story about an Indian immigrant stuck in the U.S. during the COVID-19 pandemic. Told through the lens of a short film, then a documentary, it tells of an issue that immigrants have been facing over the past two years. “Basically giving voice to Indian immigrants based in the United States, this is my story. This is something that happened to me. I lost my grandfather back in 2020, right at the outbreak of the pandemic,” Sandeep told the audience during the Q&A session of the night.

The Afghan Journalist from Director Bettina Hanna deserves recognition as well. Produced by East County Magazine freelance journalist Mimi Pollack, this documentary tells how Sayed Sadat escaped Afghanistan and made his way to San Diego, helping two women escape their predicament as well. “I was an ESL teacher for about 35 years here in San Diego and I work with people all over the world,” says Pollack, “and I felt it was very important to give a voice to the people that I worked with all the immigrants and refugees that I worked with.” 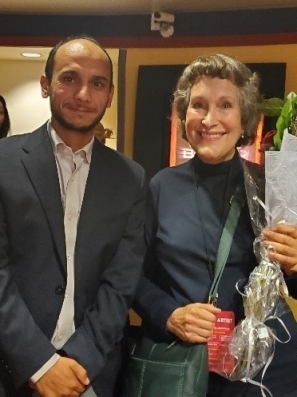 The Architect of Little Baghdad, directed by Diego Lynch, focuses on the anguish of Dr. Thabit Kalaf in El Cajon, California. Dr. Thabit's son was accused of helping American forces and was taken by the Taliban. There’s been no sign of him since. “Sometimes you find good stuff by talking to people who seem interesting,” said Diego about the process he went through to create his film. He is working on a longer documentary on Iraqi immigrants in El Cajon, which is home to the largest number of Iraq War refugees of any city in America

There were two films that took separate approaches to the immigration camps along the Mexican side of the border. Chaparral from directors Jorge Armando Nieto Sanchez, and Alma Yolanda Morales Gonzalez,  took an approach of asking how the people of the camp find hope in a place where many of us would be hopeless.

The other film, Goodbye Chapadream by director Kayla Richele Marie Mulholland, showed what became of the immigration camps and showed the destruction of  tents at the site in Mexico just south of San Diego’s border, where some migrants were given only minutes to retrieve belongings before authorities destroyed everything.  The camp which became home to many only lasted a year from February 2021 to February 2022.