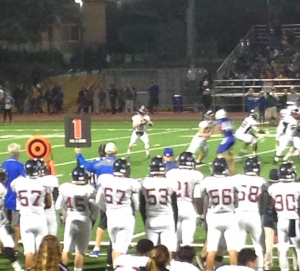 By Liz Alper
November 20, 2015 (El Cajon) - In round two of the CIF playoffs, the Steele Canyon High School Cougars traveled to Grossmont to take on the Grossmont High School Foothillers in an exciting Division I matchup.
The Foothillers wasted no time getting on the board.  In the first quarter, quarterback Hunter Gaines fired it over the middle to wide out Domonique Guevara for a 7-0 Foothillers lead.
Grossmont kept it rolling in the second quarter when Gaines found Guevara again, wide open this time, for the score.  14-0 Foothillers.
This game was all Grossmont.  Gaines aired it to receiver Khaleed Davis for the Foothillers' third touchdown of the night.  21-0 Grossmont.
After a spectacular first down catch at the five yard line by Davis, running back Jake Harr finished the job for the fourth Foothillers touchdown.  It was 28-0 Grossmont at the half.
In the second half, the Cougars managed to avoid being shut out with a touchdown pass by quarterback Thomas Fishburne in the third to make the score 28-7 Grossmont, but the second half, just like the first half, was all Grossmont.
Or was it?
Gaines made some nice spin moves on his touchdown run to make it 35-7 Foothillers, but Steele Canyon started clicking.  Running back Pierre Alexander ran it in for six to cut the Grossmont lead to 35-14 with three minutes left in the third.  After a great interception by linebacker Jake Citrinitti, he did the same thing to cut the Foothillers' lead to two scores at 35-20.
After an explosive first down catch by Steele Canyon wide out Sean Todd, running back Malcolm Anders completed the drive with a touchdown.  A blocked field goal made the score 35-26 Grossmont, but the Cougars still were within one.
The Cougars pulled to within three midway through the fourth quarter, and then with just over a minute left in the game, all of Steele Canyon's first half mistakes seemed to disappear into the night sky.
Linebacker Mikel Oliver blocked a punt and returned for a touchdown, making the score 39-35 Cougars.  That sealed the deal for the Cougars.
An amazing second half turnaround gave them the win, and a lackluster second half performance by Grossmont handed the Foothillers elimination.  Steele Canyon moves on to the semifinals next Friday.