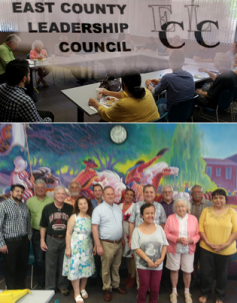 Gastil,  Kawthar Cookie, Marilyn Riley and Robert Grand are officers. Gastil explained formation of the group gathered Saturday  at the County library branch in downtown El Cajon, “There were a lot of us that came to the conclusion that we want to discuss East County,” he said, adding that the public is encouraged to become involved on an advisory committee in addition to their board.

Karwan Kallash, a former student of Gastil's, was the first to agree to advise. The room was filled with a diverse group that transcended ethnic, age and political persuasion.

During the meeting, the group discussed the difference between addressing homelessness by its symptoms or its underlying causes, notably the rising cost of rent, and also, as many pointed out, substance abuse and/or self-medicating.

Many, especially Kilian Colin, expressed support for rent control, and an upcoming ballot measure which would eliminate a law that has kept rent control in California more rare than in places like New York.

Councilman Gary Kendrick advised against rent control, saying, “When you subsidize something you get more of it. When you tax it, you get less.”  He offered a solution that mobile home park residents can use to keep their rent from increasing, though that option does not address problems faced by rents of apartments, condos, or houses.

“I am a big fan of mobile home residences buying the park,” Kendrick explained in a follow-up conversation with East County Magazine. “The state gives them a low interest loan to pay market value for the land. Each mobile home owner owns a share in the mobile home co-op. It gives them the exclusive right to occupy the space under their coach. The tenants become the landlord. The state has a program of subsidized loans to encourage this solution to rising rents. Everybody wins.”

There are over a dozen mobile home park co-ops in San Diego County, according to Kendrick, and the new owners even get to take over the previous owners’ low Prop 13 rate, giving park residents an advantage when competing against other buyers.

Kendrick and Colin had a spirited debate, to which Ronald Goetz said, “I volunteer to be on the advisory committee with the two of them,” but it is unclear if that is possible, since the group had initially planned to limit its advisory committee to non-officeholders.

Gastil himself is now an announced candidate for Lemon Grove City Council Tuesday November 6, 2018, and told East County Magazine, “I hadn't planned to run for City Council when we decided to have this group.” He told the participants he was looking for a “minimal time commitment” for the greatest possible good, advising, “If you need something done, ask a busy person.”

During introductions, ECLC Secretary Bob Grand told the group,“I have four cats, so a lot of pet issues,” in humorous response to the prompt, including “sustainability, climate and water.”

Marilyn Riley, a retired attorney who worked for the California legislature, expressed concern about marijuana dispensaries “opening in the wrong areas, like by my haircut store.”

Michael Herron who serves on the elected Valle de Oro Planning Group and is part of the Casa de Oro Alliance, spoke on the need for more housing to help address homelessness.

Councilman Kendrick applauded the people in the room for getting involved.“What I've found over the last 20 years is that informal relationships like this help get things done,” he said, then told the group that two formerly homeless men he houses at his residence, both graduates of the East County Transitional Living Center, are excellent roommates.

Nital Meshkoor is originally from Iraq and is proud to have been a citizen for the last 20 years. She is a licensed realty broker of San Diego Realty Experts and Vice-President of the Iraqi Association of  Culture and Arts, San Diego, and used to teach college level immunology before coming to the USA as a health worker.

Ronald Goetz said, “When I was very young I was a neo-monarchist,” indicating that his youthful views have evolved through the years.

Kilian Colin identifies as a Muslim Jewish queer from Iraq, who was led to the United States by a father who worked for the US military. “I am trying to bring awareness to the Muslim queer community,” Colin added, then explained learning from experience that “coming out in Lebanon, Georgia, Ukraine was easier than coming out in the United States.”

Elsa Ulloa found the group receptive, when she said, “My concern is how human beings, immigrants and farmers are treated in this country, especially now.” She described a painting of her father's in the Smithsonian with the message, “treating people kindly starts at the local level.” She noted that “the Mexican people have been here since 1600 in the American southwest, California, Arizona, Oregon, all the way up to Washington.”

Kawthar Cookie, the only female Iraqi journalist to cover the Saddam Hussein trial, and a proud U.S.citizen now, said she got involved in this country from the first day she arrived, and is running for the Valle de Oro Planning Group.

Cookie, who handled refreshments, told the fifteen people gathered, “I love this group because it's non-partisan. We come, and stand hand in hand,” she said, adding thatunincorporated communities should not be neglected.

Karwan Kallash told the group, “I don't think enough people are aware of information…I believe this organization can be a good way to communicate.”

Lampheung Khatiya commented, “I'm very interested in seeing what we as a group can accomplish.”

Roberto Alvarez's grandparents moved to Lemon Grove, where he still lives. A teacher of anthropology, he said he feels especially called to help “minority kids and drop-outs.”Summing up concerns of many, he concluded, “I'm concerned about the general environment we're living in today…I'm here to learn and share whatever I can.”

Disclosure:  Two of the participants at this event, Ronald Goetz and Nital Meshkoor, are relatives of ECM reporter Jonathan Goetz.

Obviously doesn't help most renters then, so what's the point of passing the bill? Why are so many landlords with existing apartment buildings so against prop 10 if it's passing (which seems likely) won't affect already built units? For years I've been trying to understand the reason for the continued price gouging of consumers by many property owners. Is it greed? In San Diego county the experts have explained the number one reason for these crazy high rents, is due to supply and demand. Not nearly enough rental housing or homes to buy are available. This suggests to me that the continued rent increases are not entirely based upon the costs of operation. It's gotten to the point where many renters are paying around one half of their income towards rent, and there seems to be no end in sight for continued rent increases. Normal used to be about one fourth of a person's income should be applied towards rent to be economically viable, then it increased to one third. Now look at the disparity. I think we are going to see a surge in homelessness. People, including entire families living in vehicles, tents, or perhaps with no shelter. It's bad enough out there, and it can only get worse. Especially people on fixed incomes. The most vulnerable: disabled people and retired seniors. They only receive a COLA (cost of living allowance) every 2 to 3 years. The amount? Usually around $20 or less. Meanwhile the other costs of living continue to increase as well. Is there a real fix to this economic turmoil?

will only effect new construction if it is passed.Then it must be approved on by the local governmnet.

Any existing units are exempt.

First, let's accept that this is not a problem for which there are any non-dramatic solutions. Cleaning around the edges is not going to solve our housing crisis. Second, let's not pretend that solutions have not been put on the table, only to be rejected by the same self-interested parties who make their obscene profits from rent chasing. Senator Scott Wiener introduced SB 827, which would have loosened zoning laws along transit corridors in order to get construction of new homes moving. The economic and environmental benefits of building denser housing near transportation are, well I am not going to spend much space here making a case for the obvious! But his bill was shot down in committee by the usual NIMBY suspects. The bottom line is, if NIMBYs refuse to yield on meeting the people's housing needs through smart development, then simply stated, the voters are more than justified in approving rent control measures, and perhaps even new taxes on landlords! Something has to break. For the sake of our communities, let's hope it breaks in the direction of much new sustainable development, instead of rent control laws that do indeed suffer from many of the defects that detractors claim they do. But having been given no other options, and by an otherwise willing Sacramento being thwarted by special interests, the people would be more than righteous in passing Proposition 10 into law.
I'm for some form of renter protection. It's become very economically challenging living to El Cajon. Lack of affordable housing, particularly for seniors is a serious issue. Additionally, most landlords will not accept section 8 vouchers. I absolutely feel this is a blatant form of discrimination, yet our government seems reluctant to get involved and put a stop to it.