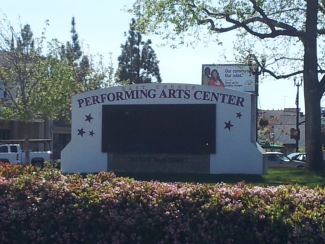 December 14, 2018 (El Cajon) -- Residents of El Cajon and the County of San Diego will have to wait awhile longer before the community's theater, shuttered for over a decade, will reopen for performances.

While performing an evaluation of the HVAC (heating/ventilation/air conditioning) system at the East County Performing Arts Center (ECPAC), experts have determined that the system will require complete replacement rather than an overall. Further investigation has found more age-related problems with the roof of the 1,140 seat theater.

A report issued as a part of the City Councilmembers’ agenda packet on December 11th states that these problems will increase project costs by approximately $1.85 million dollars. This will bump the city’s expenditure to improve the 40-year old facility to $8.2 million. Most of the funds so far for renovating the theater have come from sale of the city’s old police station on Fletcher Parkway. View ECPAC funding request.

The revised estimated completion date of the building’s renovation has been pushed to May 1, 2019. The report says that this will necessitate Live Nation, the new manager of the theater, begin booking major events for fall 2019, instead of early next year as previously projected.

Most of the members of the City Council voted to approve the increased construction cost,  with Councilman Ben Kalasho abstaining from the vote for reasons that he did not provide.

(ECM will soon publish more details about the anticipated re-opening of the theater in forthcoming coverage of Mayor Wells’ State of The City speech.)

I wonder... Considering the lack of substantial parking downtown, where will the event attendees park?

So in the past, theater-goers could park there. It was never a problem.