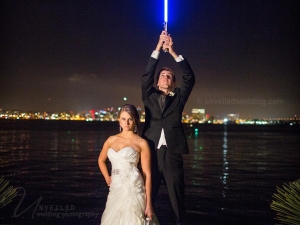 January 17, 2015 (Rancho San Diego)—“This week, an image we shot at a Star Wars themed wedding went viral on Imgur and Reddit and the story has been picked up by many news affiliates across the U.S.,” Rancho San Diego photographer Mark Hills at Unveiled Wedding Photography ( http://www.unveiledwedding.com) told East County Magazine.

Attention has picked up in anticipation of the upcoming release of a new Star Wars movie. The photo was shot at a wedding in San Diego two years ago but was posted on the Star Wars Forum at Reddit this week, where it quickly rose to the top of the Internet, receiving more than a thousand views per minute. (Original Image: http://imgur.com/oGUXK1p) .  The photographer estimates that over 2 million people have viewed the image form Asia to Europe on sites ranging form a Russian Star Wars fan site to the UK’s largest entertainment website  to the photographer’s blog, which has logged visitors from around the world.

Then, the fun started. The image was picked up by the “Photoshop Battle” Forum on Reddit and a battle soon began to see who could make the best derivative image: http://www.reddit.com/r/photoshopbattles/comments/2ryqdw/psbattle_newlyweds_husband_holds_lightsaber_high/ .  Here are a couple of imaginative examples:

One Photoshop Battler even created an animated GIF of the image: https://i.imgur.com/R5haFzx.gifv

The wedding actually took place on October 7, 2012 and the couple, Cory and Carrie Shields, has since moved to Australia.  But the image went viral just days ago. The Star Wars loving bride and groom had a life-sized, remote controlled R2D2 robot as their ring bearer, found at www.Astromech.net after scouring Star Wars websites.  The wedding party held up light sabers as the blissful couple strolled beneath them to the tune of  "Throne Room/End Title" as they were being introduced as man and wife for the first time.

The photographer emulated a pose from a 1977 Star Wars poster at the themed wedding, adding, “I’m always on the lookout for an idea that can make for a unique pose for the couple…We did a couple of other poses that day, but this was a winner, for sure!”

The groom says the theme was a natural for the couple, who met at Disneyland and married in San Diego, Comic Con’s backyard.  The bride notes that she and her groom kept R2D2’s role a secret from guests—and even shot a video with a Go Pro camera showing the surprised reactions from R2D2’s point of view.

She adds, “…the Star Wars themed presents we got were enough to furnish our apartment. We have more lighter saber chopsticks and shot glasses than I’ll ever be able to use and every room has something Star Wars related.  After the wedding, so many guests told us  it was the best wedding they had ever been to, so I guess we did something right!”